[1]The Eiffel Tower is an 1889 iron lattice tower located on the Champ de Mars in Paris that has become both a global icon of France and one of the most recognizable structures in the world. It is the tallest building in Paris and it is the most-visited paid monument in the world. Millions of people climb it every year. It was named after its designer, the engineer Gustave Eiffel who had built the tower as the entrance arch to the 1889 World’s Fair. When the tower was finished it stood  [2]320 m (1,050 ft) high, it was the world’s tallest building until it was surpassed by New York’s Empire State  Building in 1931.
[3]The construction took place from 1887 to 1889. The tower as already stated was being built as the entrance arch for the Exposition Universelle, a World’s Fair marking the centennial celebration of the French Revolution. Three hundred workers joined together 18.038 pieces of puddle iron (a very pure form of structural iron), using two and half million rivets. Eiffel was assisted in the design by engineers Emile Nouguier and Maurice Koechlin and architect Stephen Sauvestre. The risk of accident was great as, unlike modern skyscrapers, the tower is an open frame without any intermediate floors except the two platforms. However, because Eiffel took safety precautions, including the use of movable stagings, rails and screens, only one man died. The tower was inaugurated on 31 March 1889, and opened on 6 May [4]by King Edward VIII, the prince of wales who became the King of England.

The tower was much criticised by the public when it was built, with many calling it an eyesore. Newspapers of the day were filled with angry letters from the arts community of Paris. One is quoted in William Watson’s US Government Printing Office publication of 1892 Paris Universal Exposition: Civil Engineering Public Works, and architecture: as saying “during twenty years we shall see, stretching out like a black blot, the odious shadow of the odious column built up of riveted iron plates.” Signers of this letter of complaint Jean-Louis-Ernest Meissoner, Charles Gounod, Charles Garnier, Jean-Leon Gerome, William-Adolphe Bouguereau, and Alexandre Dumas.
The story of the tower is bound up with its designer Gustave Eiffel. Alexandre Gustave Eiffel was born in Dijon, France in [5]December 15, 1832 and died on December 27 1923. He was a French engineer from the Ecole Centrale Paris, a business man and a specialist of metallic structures. While he was famous for designing the Eiffel Tower he also did other works such as the armature for the Statue of Liberty, New York Harbour, United States.

Alexandre Gustave Eiffel [6]was born in Dijon-Cote-d’Or, France. The name Eiffel was adopted by his father in the early 19th century from his birthplace in the German Eifel region (in Marmagen), as the French could not pronounce his actual surname, Bönickhausen.

During his childhood the two strongest influences on him were both successful chemists, his uncles Jean-Baptiste Mollerat and Michel Perret. Both men spent a lot of time with the young Eiffel, filling his head with everything from chemistry and mining to religion and philosophy. At school, Eiffel was extremely clever, but not very studious. While attending secondary school at Lycée Royal, Eiffel was bored and felt that the classes were a waste of time. It was not until his last two years at school that Eiffel found something he was interested in, history and literature. Eiffel’s school work improved and he graduated with a degree in both science and humanitie
Eiffel went on to attend college at Sainte Barbe College in Paris. He did this in order to prepare for the difficult entrance exams into the most famous engineering institutions in France. In the end Eiffel went to the École Centrale des Arts et Manufactures in Paris where he studied chemistry. He received the equivalent of a Master of Science degree in 1855. École Centrale was a private school that is even today known as one of the top engineering schools in Europe. His mother’s coal business provided plenty of income for the family and provided the funds for Gustave to receive his university education.

The year 1855 was the same year that Paris held the first World’s Fair. After graduation from college Eiffel’s uncle offered him a job at his vinegar works in Dijon, France. However after a family dispute this job was withdrawn and [7]Eiffel soon accepted entry-level employment with a company that designed railway bridges.

Charles Nepveu provided Eiffel with his first job as one of many project managers for a railway bridge located in Bordeaux, France. During the building process, other engineers on the project were steadily quitting, and Eiffel eventually took charge of the entire project. Nepveu saw the work that Eiffel performed on the site, and continued to place Eiffel in other jobs that involved project management of railway bridges and structures. During these projects, Eiffel got to know other engineers of the time, and he would be remembered for his work and allowed to work on other projects. [8]Nepveu was a strong influence on Eiffel that helped him become more successful with his future projects. 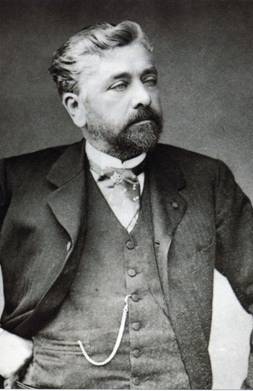 Eiffel set up his own construction company called et Cie, This company designed La Ruche in Paris, France. This like the Eiffel Tower, became a city landmark. It is a three-storey circular structure that looks like a beehive and was made as a temporary building for use as a wine warehouse at the Great Exposition of 1900.

He also built the Garabit viaduct, a railway bridge near Ruynes en Margeride in the Cantal region In South America, Eiffel designed the central railway station in Santiago de Chile (1897) and the Mona Island Light located near Puerto Rico. In 1887, Eiffel became involved with the French attempt to build the Panama Canal. The French Panama Canal Company, led by Ferdinand de Lesseps, had been attempting to build a sea-level canal, but came to the realisation that this was not impossible. An elevated, lock-based canal was eventually chosen, and Eiffel was hired to design and build the locks. The entire canal project suffered from mismanagement, and collapsed with enormous losses. [9]Eiffel’s reputation suffered a severe setback when he was implicated in the financial scandals surrounding de Lesseps and the business men backing the project. Eiffel himself had no connection with the finances, and his guilty judgment was later reversed. However, his work was never finished as the later American-built canal used new lock designs.

The Eiffel Tower had a huge impact on France. [10]The tower was the focal point of the Exposition Universelle (1889) and drew millions of people to Paris. Nearly two million people visited the Tower in 1889 alone. The tower quickly became a tourist attraction and brought large amounts of money into France’s economy. After originally being thought of as an eyesore. The tower quickly became a national symbol of France and brought a sense of pride to the people who live there.

Another of his famous work involved Statue of Liberty it was a gift from France to the United States. Eiffel’s design for the interior structural elements of the statue allowed for the statue to become a reality. [11]The statue shows the friendship and respect that was shared between France and the United States. The Statue of Liberty quickly became a national symbol of freedom in the United States and gave citizens a sense of pride. The statue became a great tourist attraction and brought many people to New York, boosting the economy. Several Americans living in France were pleased by the gift to their country and in turn, built a ¼ scale bronze model which stands on the downstream end of the Île des Cygnes, 1.4 km southwest of the Eiffel Tower.
With all the opportunities the Industrial Revolution brought with it, it also had many challenges. Just as Eiffel had the opportunity to work on more projects in different locations, so did other engineers. Competition for projects was very high and hrs reputation as an engineer played a major role in obtaining projects. Yet another challenge during Eiffel’s career was the introduction of new construction materials. Since the new materials had not been proven in projects, engineers took a risk in using them. Many of the bridges Eiffel had built were made from new styles of steel which Eiffel had helped invent.

Some of his later advancements included designing a system of hydraulic presses which allowed workers to build bridge foundations deep under water, creating sturdy yet lightweight “web-like” trusses and arches to withstand high winds, using wrought iron for bridge construction because its flexibility could withstand high winds, curving the edges of piers to create more stable bases, and the development of “launching” which is a way to more easily move pieces of structures into place. Eiffel’s ingenuity and brilliance allowed him to design and build some of the world’s most famous structures.
After retirement he researched and developed new ideas through practical use of the Eiffel Tower. The tower enabled him to make advancements in meteorology, and radio-broadcasting. He built a wind tunnel at the base of the tower for his research, had weather equipment placed in various locations on the tower, and suggested that the military install radio equipment at the top of the tower. In the following years it continued to serve as a permanent radio tower, and eventually for television broadcasting.

Eiffel died on December 27, 1923 in his mansion on Rue Rabelais in Paris, France. He was interred in the Cimetière de Levallois-Perret. A brilliant engineer he will however always be remembered for the tower he built in Paris.