Aims:
The aim of my research project is to investigate glacial processes and resulting features found in Glendalough. 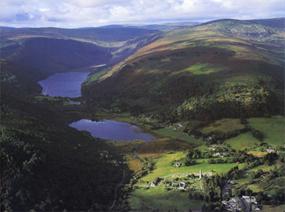 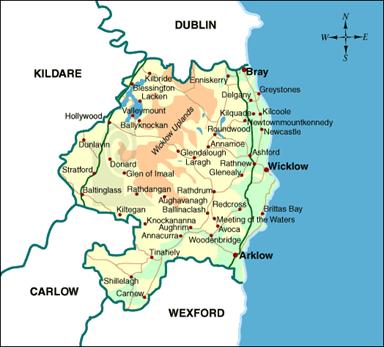 The journey to Glendalough required lots of preparation and organisation.
The organisation required:

Part 3: Introduction to gathering of data

Introduction:
This section of the full study had two parts:

The first thing I had to do was background research and the second I had to collect information at the study site.

Here are the methods I used to collect data in the National Park:

Method (a): Sketch map
We drew a sketch map of the Glendalough Valley near the upper lake looking back towards the mountain. We did not make it perfect because we knew that we would have corrected it in class. Then we marked in all glacial features we could see and we also identified the rocks in the valley using the vegetation line as a guide.(put a photo of the sketch map across the page on the blank)

We then learned how to identify the rock types in the study site. It was not very hard because of their appearance they are easy to spot and we took a basic geology book with us to help this process in the field.

Method (d): Measurement of the Glacial Erratic
Before measuring the glacial erratic we had to find a good example of it and the Educational Centre in Glendalough National Park show us one which we then marked in on the Ordnance Survey map. Our class’ objective was to find out how big the glacial erratic was and also to find out how strong the glaciation was in the park. We then measured the erratics height, width and its depth. With these results we could then find out its mass using a formula. We then identified the type of rock it was.

Method (e): Completing a Cross Section
We had to draw a cross section of the valley floor to find out if the valley was U – shaped or V – shaped, also we tried to get an idea of the channel that the glacial material moved through. Glaciers always have a U – shaped valley but it was our job to prove it. We started drawing it in the Glendalough National Park car park which was facing the slope. We placed a Staging Pole down and looked for the first break of the slope and put another pole when we found it. When we had the poles set up we used the measuring tape to measure the distance and using a Clinometer we found out the angle. We then did three cross sections.

Glendalough has a varied heritage in terms of history, geology, archaeology, glaciology, flora, and fauna. The Glendalough Valley was carved out by glaciers during the Ice Age and the two lakes, from which Glendalough gets its name, were formed when the ice eventually thawed. The National Park covers an area of 20,000 hectares and covers much of upland Wicklow. It has a variety of fauna and flora because of this over one million visitors come every year. Wicklow Mountains National Park was established by the government in 1991 and is managed by the National Parks and Wildlife Service.

420 million years ago, when the continental plates of North America and Europe collided, the land beneath the sea buckled upward. The land rose out of sea, forming the Wicklow Mountains. The Wicklow Mountains are famous forgranite rock which has been quarried for centuries. The second rock there is mica-schist

Glaciers, while geographically restricted, are effective agents of landscape change. The gradual movement of ice down a valley causes abrasion and plucking of the underlying rock. The debris transported by the glacier, when the glacier recedes, is termed a moraine. Glacial erosion is responsible for U-shaped valleys. Like great rivers of ice, glaciers have sculpted mountains and carved out valleys. They continue to flow and shape the landscape in many places today. Ice erosion can take one of two forms. It can be caused by the movement of ice, typically as glaciers, in a process called glacial erosion. It can also be due to freeze-thaw processes in which water inside pores and fractures in rock may expand cause further cracking.

Ice-ages:
There is evidence for a large number of ice ages but the last one (which shaped Glendalough) is know as the Midlandian. It was punctuated by at least one mild phase around 65,000 to 35,000 years ago. During the last Ice Age, which ended approximately 10,000 years ago, 32 percent of Earth’s land area was covered with glaciers. At present, glaciers cover roughly 10 percent of the land area. A vast majority of that glacial ice overlies much of the continent of Antarctica. Most of the rest covers a great portion of Greenland; a small percentage is found in places such as Alaska, the Canadian Arctic, Patagonia, New Zealand, the Himalayan Mountains, and the Alps. The earlier ice age was called Munsterian which occurred between 300,000 and 130,000 years ago and was more extensive than the Midlandian.

The last Ice age in Ireland

Erratic:
Glacial erratic, a boulder picked up and transported by glacial ice. The rock type of the boulder differs from that of the underlying bedrock. The presence of erratics has always confused and enthralled humans.  In ancient times stories often developed attributing the strewing of erratic stones across the landscape to sprits or gods, and they may consequently have been used in monuments worshipping these.  Further through time, large stones or boulders, as well as other geological oddities, built up their own folklore, with stories of gods, devils, giants and witches, all explaining in various localities where and why elements in the landscape look as they do, as are where they are.  There are hundreds of beds where Diarmaid and Grainne lay throughout Ireland. Many of these are large erratic blocks.  We need not accept that these stories were generally believed, but such geological oddities certainly provided the basis for much story telling or seanchas.
Further through time, people in 19th Century Ireland always wondered why there were limestone gravels at 400m O.D. on the granite of the Wicklow Mountains (this after much advances had been made in the science of geology).
U-shaped valley
U-shaped valley is the shape left after a valley has been overdeepened by a glacier. The original V-shaped valley, which would have been made by a river, is widened and deepened after the ice has eroded the sides and bottom of the valley. V-shaped valleys have a wide flat floor, which may contain ribbon lakes. The sides of U-shaped valleys may have hanging valleys, which are side valleys that are left high on the side of a main valley that has been deepened by glaciation. Streams flowing in a hanging valley may form a waterfall as it flows down the steepened sides. 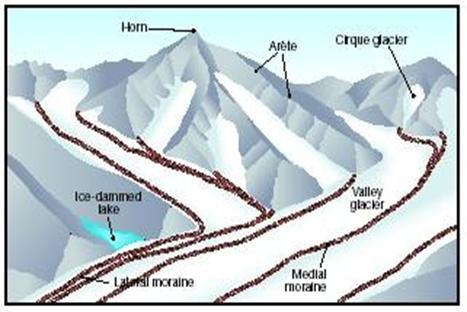 We did 3 cross sections in total. I have put all 3 sets of results into a table (below).

The table of results show clearly that Glendalough is a glaciated U-shaped valley which was made during the last ice age. While we did get the whole side done (because of the height) the diagram show a flat floor and the turn to form a U. One interesting thing is that the real world glaciated valleys are not as perfect as the ones in the geography book.

Sketch map:
The first task completed in the park was the sketch map. This was done at the gap between the upper and lower lake. The sketch shows clearly that Glendalough is a glaciated valley with a U-shape. Also the geological is clearly marked by vegetation.
Glacial Erratics:

We sets of measurements were by the class in Glendalough. There is the basic figure for height, length, breath.

Glacial features on a map:

When we went to the park we took an OS map with us. We looked at it carefully and marked any glacial features we saw on it. These included a U-shaped valley, ribbon lakes and hanging valleys. I have drawn a sketch map from this and put it on the opposite page.

It is obvious from this project that Glendalough has been shaped by ice during the last ice age. My project showed how the park has features of glacial erosion and deposition.

Here is my review of the geography project. I think that I have achieved my aims: