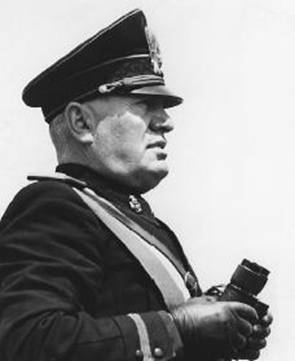 A restless child, Mussolini was disobedient, unruly, and aggressive. He was a bully at school and moody at home. Because the teachers at the village school could not control him, he was sent to board with the strict Salesian order at Faenza, where he proved himself more troublesome than ever, stabbing a fellow pupil with a penknife and attacking one of the Salesians who had attempted to beat him. He was expelled and sent to the Giosue Carducci School at Forlimpopoli, from which he was also expelled after assaulting yet another pupil with his penknife.
He was also intelligent, and he passed his final examinations without difficulty. He obtained a teaching diploma and for a time worked as a schoolmaster but soon realized that he was totally unsuited for such work. At the age of 19, a short, pale young man with a powerful jaw and enormous, dark, piercing eyes, he left Italy for Switzerland with a nickel medallion of Karl Marx in his otherwise empty pockets. For the next few months, according to his own account, he lived from day to day, jumping from job to job. 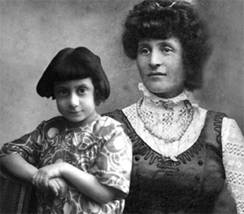 Mussolini’s rise to power was rapid; his Fascist Party Blackshirts marched into Rome in 1922, a year before Hitler’s failed first attempt to seize power, the Munich Beer Hall Putch, landed the German in prison. By the time Hitler became the Fuehrer (Leader) of Germany, Mussolini had been “IL DUCE” (Leader) of Italy for more than ten years. He had been successful in improving the Italian economy and bringing stability,as it was said, “He made the trains run on time” (by shooting someone if they didn’t). His ambition was to regain for Italy the prestige and power.
Benito Mussolini, “IL DUCE”, Prime Minister of Italy, is an Axis European political leader. Like Hitler, he served in the First World War as a young man and dreamed of military glory in a Second War to come. Both returned from the First World War to find their countries in political and economic chaos and formed extremist political parties.
This led him to a program of militarization. Many Europeans felt that his visible successes in restoring Italy outweighed any “rumors” of police brutality. His 1935 invasion of Ethiopia was carried out with a ruthless disregard for world opinion,including the use of poison gas. When the British and French leaders condemned him for these acts, he looked elsewhere for allies and found Germany and Japan.
He joined Hitler in supporting the Fascist “Nationalist” side in the 1936-1939 Spanish Civil War. This gained him an ally, Spanish Generalissimo Franco, but being associated with the atrocities of this brutal war lost him still more support in the rest of the world.
His biggest mistake, however, was the decision to enter the Second World War. On 10 JUNE 1940, Germany had been at war with Britain and France since the previous September, but Italy was still at peace, and had little reason to fear that any of the other powers would attack it. Germany was on the verge of winning the Battle of France, and France was likely to surrender very soon, and it seemed to many observers that Britain would then make peace. Perhaps Mussolini thought that Italy would be the next target for Nazi aggression, if he did not help Hitler win; or he may have just been moved to grab a piece of France before it was too late. In any case, he did declare war on France.
The war did not end, however, and as it continued, the true weaknesses of the Italian Army and Navy were revealed. When Advancing the Front,Mussolini will try first, to defeat the British, to keep them out of the Mediterranean, “his” sea. Then he will concentrate on beating the Soviets,before he tries advancing across the Atlantic to fight the USA. Large new warships did no good when the admirals commanding them were unwilling to risk defeat. Brave and well-trained pilots could do very little when most of them were flying obsolete, lightly-armed biplanes, that looked good at an air-show but could not hope to catch modern bombers. Soldiers and sailors who lack confidence in their leaders and equipment, are not eager to make up for it with their blood. Italian armies were beaten not only by the more modern forces of Britain, France and the USA, but by the Greeks, when they attempted to invade Greece in 1941. 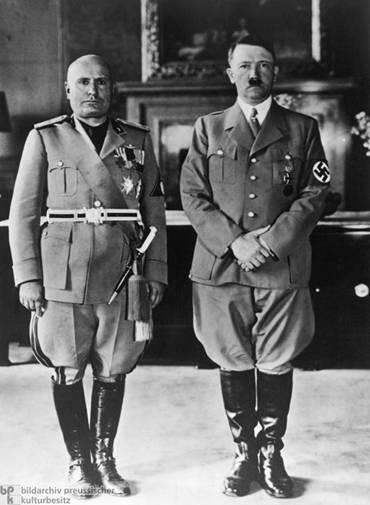 By July 1943, Italy had lost all of it colonies in Africa, and most of its army, and was being invaded. Mussolini was deposed by a revolt within his own Fascist Grand Council, and Victor Emmanuael III, the King of Italy, who had been reduced to a figurehead by Mussolini, appointed Marshal Badoglio to be the new Prime Minister. Mussolini was arrested, while Italy attempted to change sides. In the southern part of Italy, occupied by the Allies, this succeeded, and the new Italian government helped create the Italian Co-Belligerent Forces.
Hitler sent German paratroops to rescue Mussolini from the mountaintop resort where he was imprisoned. He then set up the Italian Social Republic in German-held northern Italy, with Mussolini as its leader.
When the Germans surrendered in northern Italy, in April, 1945, Mussolini was arrested again. He and his mistress, Clara Petacci, were removed from the jail at Giulino di Messegra and lynched, by the local Communist partisans.