n the early morning hours of June 7, 1944, reporter George Hicks stood on the deck of a destroyer stationed off the shore of Omaha Beach as the Allied invasion of Europe, that had commenced the previous day, unfolded before him.

Preparations for the invasion began almost the day the British Army evacuated Dunkirk in 1940. When America joined the war, a date for the invasion was optimistically set for 1942. When reality set in, the date was moved to 1943 then to 1944. The final timetable called for a landing on the Normandy coast on June 5 when tide, weather and moonlight would be most favorable
The Germans knew the invasion was coming; they just didn’t know where or when. An elaborate deception kept them guessing. This effort was so successful that even after troops stormed ashore at Normandy, Hitler believed it only a feint with the real invasion to take place at Pas de Calais. On June 4, the largest amphibious force ever assembled left its English ports for the French coast. The weather did not cooperate, however, and storms forced General Eisenhower to delay the effort for one day.

Airborne troops went in first, landing behind the beaches in the early hours of June 6. At dawn the invasion force waded ashore at five beaches – the British and Canadians at Gold, Sword and Juno; and the Americans at Utah and Omaha. Troops landing at Utah met relatively light resistance. The story was different at Omaha. The Americans faced a battle-hardened German division that pinned them down with a withering cross fire. Gradually they moved forward and off the beach. The price was high – 2,000 casualties at Omaha compared to 210 at Utah. By the end of the day the beaches were secured and a toehold established in Hitler’s Europe. 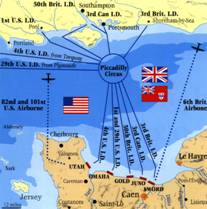