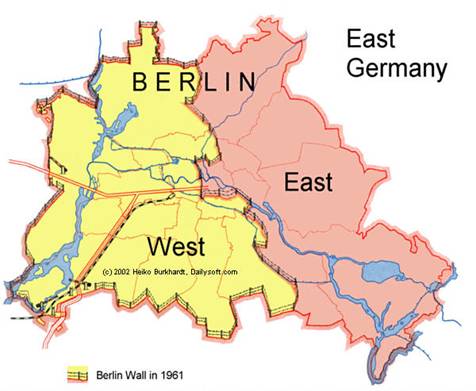 East Germany was the name for the former republic of Europe, bordered on the north by the Baltic Sea, on the east by Poland, on the south by the Czech Republic, and on the south and west by West Germany. It had an area of 108,178 sq km and was established officially as the German Democratic Republic (GDR) on October 7, 1949. The republic named East Berlin as its capital, a decision that other powers refused to recognize.

Walter Ulbricht, a long-time member of the German Communist Party, ruled over East Germany for more than 25 years. He helped found the Socialist Unity Party in 1946 and was General Secretary of the party from 1950 to 1971. He was Premier of the republic from 1949 to 1950 and Chairman of the Council of State from 1960 to 1973.
Determined to transform his country, ravaged by World War II, into a major Communist power, Ulbricht designed a foreign policy to foster friendly relations with other Communist states. In 1950 East Germany made a treaty with Poland and joined the other Communist nations in the Council for Mutual Economic Assistance. In 1954 the republic’s stature grew when the USSR ended its demands for reparations. In 1955 East Germany became of the Warsaw Pact. Ulbricht made a pact with the USSR in 1964 to maintain Communism in Eastern Europe, and negotiated a trade agreement in 1965 in return for Soviet political support.

In the 1950s East Germany’s relations with West Germany became strained after the West German Chancellor Adenauer claimed that all Germans were one nation. Relations became even more strained with the division of Berlin into separate zones. Berlin lay deep within East German territory, but had been divided into east (Communist) and west (non-Communist) sectors. To stop the flow of dissatisfied East Germans to the West. Ulbricht set up a well-guarded corridor along the country’s western frontier, leaving Berlin as the only practical escape route.

However dissatisfaction with the economic and political conditions (forced collectivisation of agriculture, repression of private trade, supply gaps), increased the number of people who left the GDR over the period. From January to the beginning of August 1961, about 160,000 refugees were counted. The international political situation also.  In 1958, the Soviets (Khrushchev) delivered their Berlin ultimatum, demanding that the wastern allies should withdraw their troops from West Berlin and that West Berlin should become a “free city” within six months.  Rumours about a permanent divion of the city began to appear.  At an international press conference however on June 15, 1961, Walter Ulbright answered a journalist:”I understand your question as follows: there are people in west Germany who want us to mobilise the construction workers of the GDR to build a wall. I am not aware of any such plans…. No one has the intention of constructing a wall.”

However early in the morning of Sunday, august 13, 1961, the GDR began to block off East Berlin and the GDR from West Berlin by means of barbed wire and antitank obstacles.  Streets were torn up, and barricades of paving stones were erected.  Tanks gathered at crucial places.  The subway and local railway services between east and West Berlin were interrupted. Inhabitants of East Berlin and the GDR were no longer allowed to enter West Berlin, amongst them, 60,000 commuters who had worked in West Berlin so far. In the following days, construction brigades began replacing the provisional barriers by a solid wall.

In the second half of the 1960`s East Germany built a barrier twice as high as the original wall.  They also put electrified fence a hundred meters behind the wall.  On the inside, there were guard dogs and guards with mercury lamps.  An anti tank ditch run along the length of the strip to prevent east German soldiers diving across to the west.  To deal with any escaper who evaded the guards, the mines and tripwire-operated guns were set up.

In domestic affairs Ulbricht’s first concern was to rebuild the East German economy. After World War II East Germany was left with only one-quarter of its pre-war resources, but was required by the USSR to pay three-quarters of overall German reparations to aid Soviet war recovery. Ulbricht attained his goal by imposing an iron discipline. The Socialist Party completely controlled the government, which had already taken over all heavy industry and agriculture and which gradually took over all smallholdings as well. Emphasis was placed on heavy industrial production to satisfy Soviet requirements. In 1953 increased production quotas and food shortages caused worker revolts, which were put down by Soviet troops.
With the New Economic System of 1963, a policy characterized by partial decentralization and planning, economic recovery in East Germany occurred rapidly. As workers’ incomes and benefits improved, they became somewhat more reconciled to the Communist government. A new, fully socialist constitution was adopted in 1968.
From 1968 to 1989 East Germany was governed under a constitution that said that the country was a sovereign socialist state in which all political power lay with the working people. In practice, power resided with the Socialist Unity Party. The 1968 constitution guaranteed the party a leading role in national affairs, and its general secretary, as head of the party’s political bureau, was the most powerful person in the country. East Germany’s parliament, the People’s Chamber consisting of 500 deputies, met only for short sessions. To carry out its functions at other times, the People’s Chamber elected a Council of State.
After 1971, when Ulbricht was succeeded by Erich Honecker as leader, Relations with West Germany improved after West German Chancellor Brandt and East German Premier  Stoph agreed to ease West German travel restrictions to West Berlin in 1972 and began formal diplomatic relations in 1973. New trade, aid, and travel agreements were signed with West Germany in 1984, and in 1987 Honecker became the first East German head of state to pay an official visit to West Germany.

In the year 1989, there were more dramatic events such as a massive flight of inhabitants of the GDR via Hungary and big demonstrations in Leipzig on Mondays. After weeks of discussion about a new travel law, the leader of East Berlin’s communist party (SED), Günter Schabowski, said on November 9, 1989 in somewhat unclear words that the border would be opened for “private trips abroad”. An onrush of East Berliner’s towards West Berlin began. On November 10, demolition works on the wall began.
Short Questions

Review of one of the sources

The book contains a complete history of the Berlin wall from its construction to its eventual deconstruction in 1991. It was a valuable source because it tells us about the East Germany people and how the wall affected their lives. That there plenty of photographs and illustrations in the book and this gave a good visual sense about the wall. Finally it contained a good bibliography which pointed the way to other soures.

By completing the research topic, the following skills of the historian were acquired: