The following table gives some idea of what progress was made when the base line figure is 1927 – before the five year plans. The target for both plans is in brackets.

Though these appear excellent results, it must be remembered that the base line for 1927 was small by west European standards. However, the improvements did represent a massive jump forward.
The second five year plan continued to emphasise heavy industries but there was also a commitment to communication systems such as railways and new industries such as the chemical industry.
The third five year plan put an emphasis on weapons production (which required an input from heavy industries) as war did seem to be approaching.
Stalin brought in experts from foreign countries to help them, and he introduced single managers to run factories whereas one of the main beliefs of Lenin had been the running of factories by soviets (workers councils who would come to a joint decision on how things should be done). These managers were directly responsible for fulfilling the targets set for their factory. Good managers were well rewarded. Unsuccessful managers could pay a severe price for failure.
For all the apparent success of the five year plans, there were serious flaws. Parts for industrial machinery were hard to get and some factories were kept idle for weeks on end simply because they did not have parts to repair worn out machines. Ex-peasants were used as skilled workers. This simply did not add up. Despite their valiant efforts, many machines were damaged because those using them had no idea on how to correctly use these machines. There were also no parts to repair this damage.
Factories took to inflating their production figures and the products produced were frequently so poor that they could not be used – even if the factory producing those goods appeared to be meeting its target. The punishment for failure was severe. A manager could be executed as an “enemy of the people”. Workers could be sent to a prison camp in Siberia. Nobody was allowed to condemn or criticise the five year plans as they were Stalin’s idea. 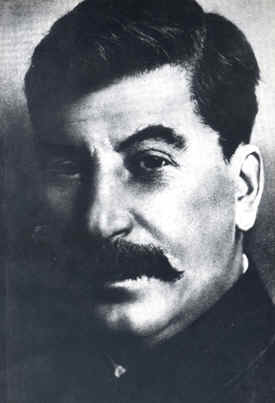 Stalin’s Five-year Plans dealt with industrial production, but something needed to be done about the food supply so Stalin introduced collectivisation. After years of resistance and famines Stalin eventually executed those who resisted, or sent them to labour camps.

Stalin advocated collective farms
By the end of the 1920s, it was clear that Russian agriculture was inadequate. Although the kulaks were relatively wealthy and successful, the thousands of tiny, backward peasant farms were not producing enough to feed the population.
In 1927, Stalin declared that the way forward was for people in each village to voluntarily unite their farms into one collective farm. This kolkhoz would be able to afford machinery, be more efficient, and be able to create a surplus to send to the towns.

the peasants burned their farms
After two years, when everyone had ignored his idea and there had been a famine, Stalin made collectivisation compulsory.
The peasants hated the idea, so they burned their crops and killed their animals rather than hand them over to the state. There was another famine in 1930.

kulaks were sent to the gulag
Stalin relaxed the rules for a while, but in 1931 he again tried to enforce collectivisation.
Again there was the same resistance and another, worse famine.
Stalin blamed the kulaks, and declared war on them. They were executed or sent to the gulag.