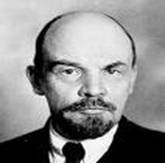 Lenin was born and raised in Simbirsk West Russia. He went to Kazan and St. Petersburg were he studied and graduated in law. From 1897 to 1900 he was exiled to Siberia for participating in underground revolutionary activities. In 1903 he caused the split between the Bolshevik and Menshevik factions. In October 1917 he led the Bolshevik revolution and became head of the first Soviet government. With Trotsky, he brought it successfully through the civil war (1918-1921) after which he introduced the new Economic Policy. In 1924 Lenin died of natural causes, his body was embalmed and placed in a mausoleum near the Moscow Kremlin.