We were in the centre of Paris, at midday, on a glorious sunny autumnal day. There were thirty students from Riversdale Community College and five teachers led by Ms. Ryan. We had arrived and the adventure had begun. To the cries of “Ici mon group” we were led around the sites of beautiful Paris.

First stop was Notre Dame. Nothing prepares you for the sun shining on the majestic splendor of the spires of Notre Dame soaring to the sky, held firmly in place by its flying buttresses. The saints and apostles gazed down in the midday sun. The Gargoyles hung over the edge of the building and somewhere in the bell tower Quasimodo’s ghost lurked. We mingled with the crowds on the platform outside in awe.

Inside was dark and somber with the sun lighting up the deep colours of the stained glass windows and glinting on the gold vessels, creating a sense of deep reverence. 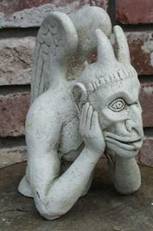 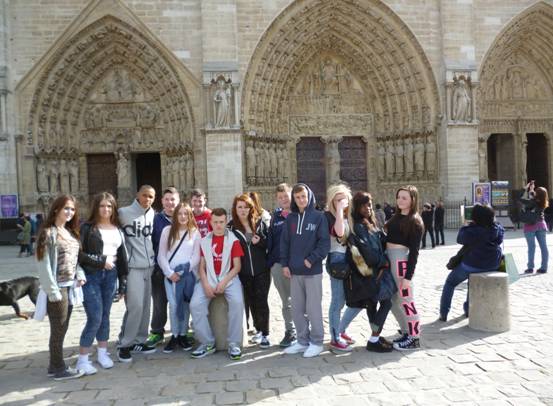 Notre Dame seen and conquered it was time for lunch.  What else! A typical French meal on the Boulevard Saint Michel- a Mac Donald’s Saver Deal!. Ms. Ryan ,ably helped by Jordan Bradshaw gave the waitress the orders for 35 people.  Everyone patiently waited on their glorious food and the true kindness, heart and generosity of the students was displayed when one student discovered his money was gone – a large sum. Within minutes a whip around was organized and the student was in profit. Ms. Ryan sorted that out!

So fed and watered we were ready to take on all of Paris. Off all along the banks of the River Seine to the Eiffel tower – many miles in the distance. We passed all the magnificent buildings of Paris – The Hotel de Ville, the Louvre, the Musee D’Orsay and Les Invalides. We passed all the little stalls, ”les bouquanistes”, and began the stocking up on souvenirs and presents. We passed all the bridges, including the Pont Neuf, the oldest in Paris. 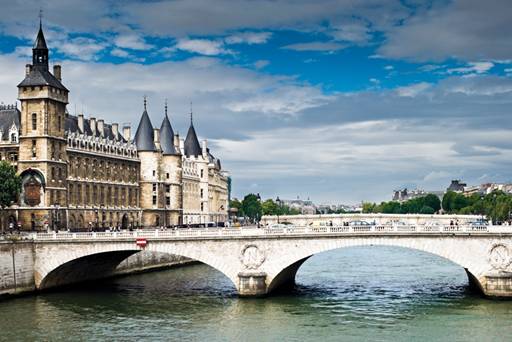 Pont Neuf with the Hotel de Ville in the background.

Of particular interest to some of the students was the Pont des Arts where true love is declared and guaranteed, to last by the placing of a lock with the lovers’ initials on it onto the bridge and throwing the key into the river Seine…. So in true French romantic spirit, Rebecca and Ben and Jade and Eric demonstrated their undying love to the world. 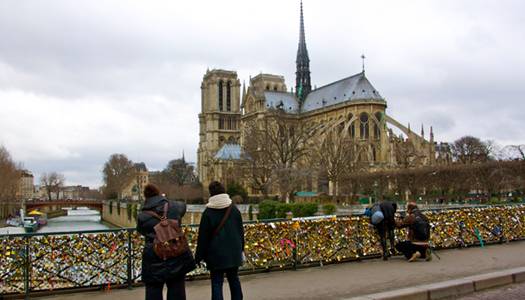 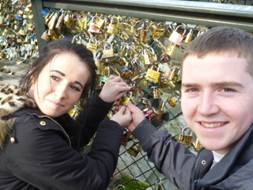 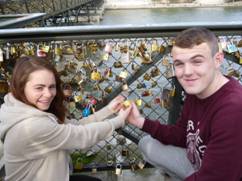 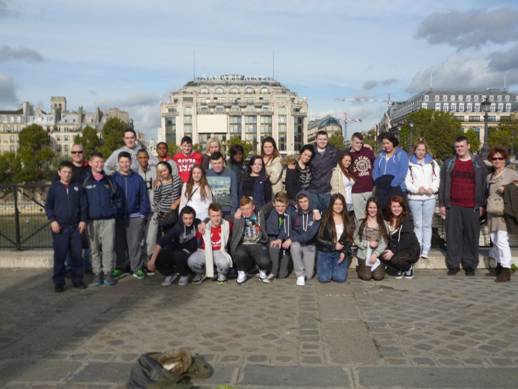 Are we nearly there? Are we there yet? How many more bridges?

After many, many more bridges, (including this one where we got a LOOK at the big department store Samarataine), lots of practicing of our French, chats and flirting with fellow students, forming of new friendships, chats with teachers and a  lovely saunter in the afternoon sun, we arrived at the Tour Eifel!!

It was so stunning. It was so much bigger than we expected. It was as if we suddenly realized we were actually in Paris. 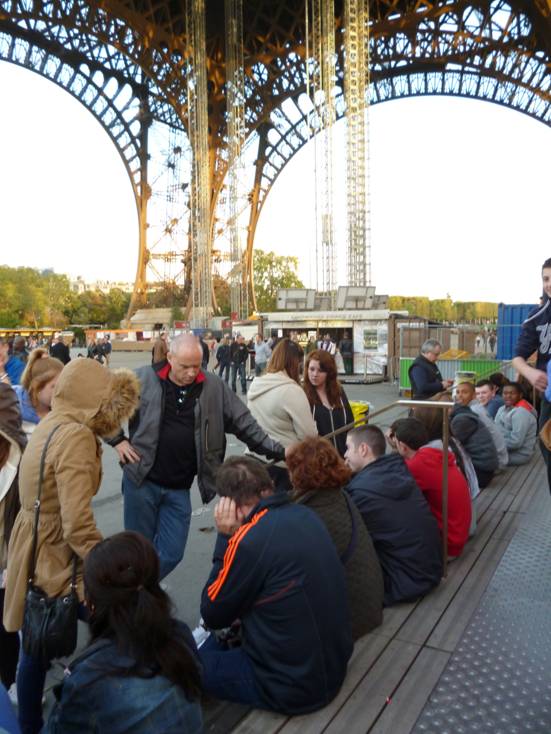 Then it was time to go up this historic landmark.  Here Mr. Murphy was trying to sort out the timid from the brave. So most of us went up the lifts. The lifts were incredible. We were packed liked sardines and up it went with all the students clinging to each other. There were some interesting little clutching of each other as the lift jolted.
The view from the second floor was amazing. The students were in heaven and kept pinching themselves to check it was real. The glory and wonder of Paris was stretched out below them and they said they would always remember this moment. 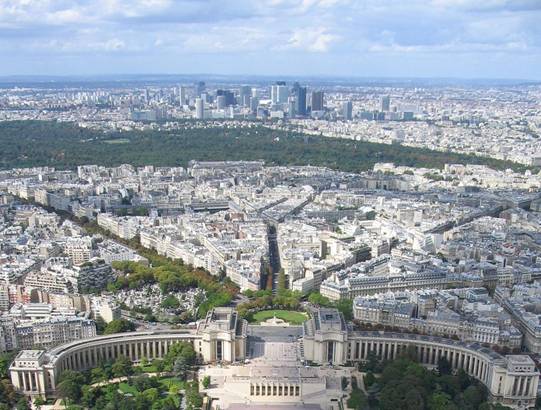 When we descended we went over to the Palais de Chaillot and bought our souvenirs of the Eiffel Tower from the street hawkers. There were key rings, six inch Eiffel towers, one foot Eiffel towers, multi coloured Eiffel towers  and even, Eiffel towers that lit up and sparkled. We bought them all. Another interesting souvenir was the Little Mr. Potato men that every one adopted as their pet!! 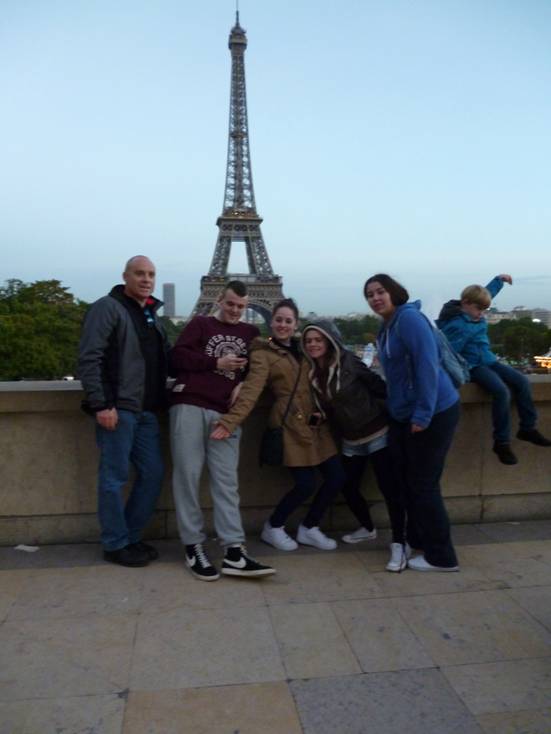 In front of the Eiffel Tower.

We sped off next in hot pursuit of Ms. Ryan to see the Arc de Triomphe. 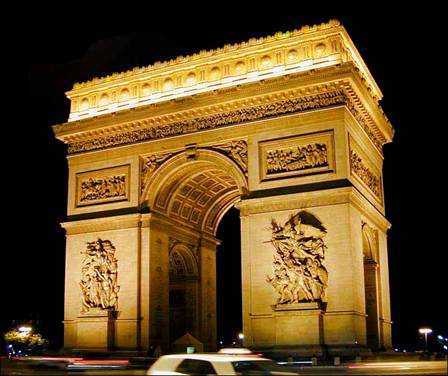 We walked along the Champs Elysees and finally it was time for dinner so off we went led by our intrepid group leaders with their cries of “Ici mon group”. Onto the metro and up and down miles of tunnels as we changed lines and arrived at our destination “Flunches” n the area called the Beaubourg.
Fed and tired we were guided back to our hotel. Amazingly we all slept – no mid night wanderings, parties or carrying on! Just tired sleepy students.

Eurodisney !   Led by our group leaders, Ms. O’Reilly, Mr. O’Reilly, chief photographer, Mr. Murphy , Ms. Weldon and Ms. Ryan, we took the metro and the R.E.R. train line A to Eurodisney. We arrived and after a long wait while Ms. Ryan and Ms. Weldon went for our tickets, we were in. It was magical. Everything was beautifully built and decorated. We saw the princess castle and the Disney characters. 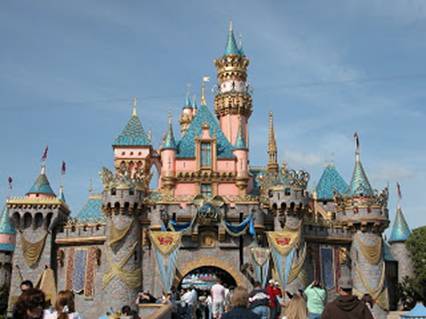 As it was nearly Halloween the whole place was decorated with pumpkins, witches, who were cackling with laughter,  and ghosts. We were not interested in any of that however. Oh no!!  Off to the big scary rides with us.
(We were not scared). So first up was Thunder mountain- a roller coaster through a mountain where we were swirled and turned and flew around bends at incredible angles. It was hair raising. 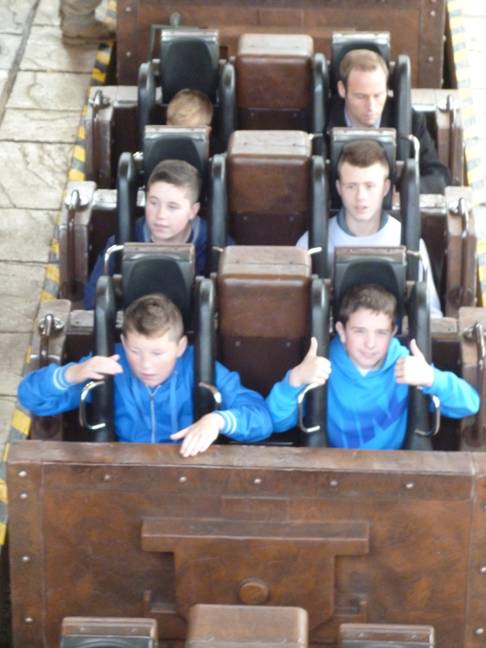 But on with the brave. Next up was Space  mountain. Fantastic!!!  It was exhilarating. 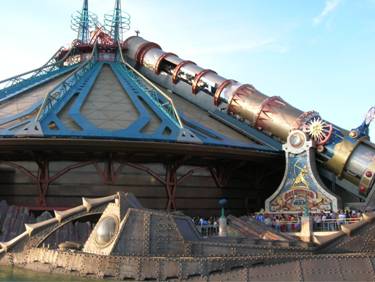 We tried all the rides after that including the haunted house, some very interesting spectres in there and lots of noisy witches cackling hoarsely. 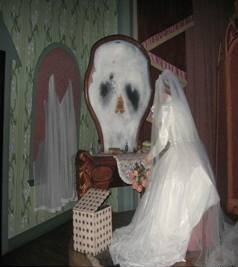 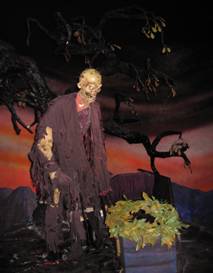 Then we tried the Indiana Jones ride. Myles Farrell kindly told the female teachers that they would be turned upside down so they kindly volunteered to take the photos!!
How very thoughtful!! 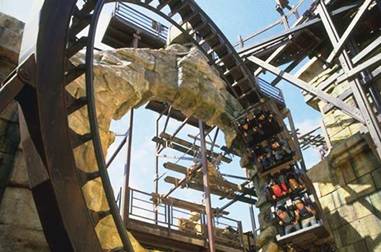 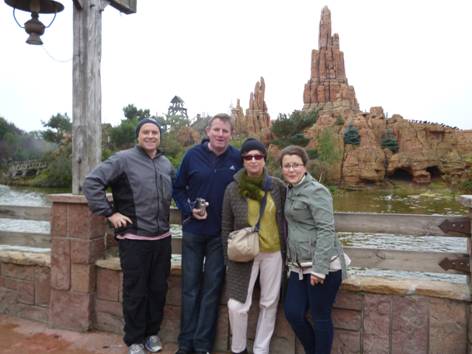 The teachers and Thunder Mountain.

Reluctantly we left Eurodisney and headed back to Paris to Flunches for dinner again. It was now late evening but Ms. Ryan was determined not to waste a single moment of our precious time so she took us on another little stroll to see if it would be possible to catch the “Bateaux Mouches” and do a Seine Cruise! Sadly by the time we finished our walk from the Beaubourg to the landing for the boats at Pont D’Alma it was 11pm. What a surprise the boats had stopped. Never mind we saw Paris at night and the Eiffel Tower all lit up and we had chats and laughs among ourselves and with the teachers.
Back onto the metro and into bed at 1am!!  Again there were no parties or wanderings just 30 exhausted students.

Ms. Weldon came banging on all our doors at an ungodly hour as we had to be at the Louvre for 10.am to see the “Mona Lisa”. However first we had to pack our bags, beautify ourselves and have breakfast. Anyway at 9am.promptlly, to cries of “Ici mon group”, we followed our leaders to the metro.
The Louvre was beautiful. The “Mona Lisa” was interesting- a little smaller than expected. We looked at all the paintings in the European section. Some were enormous and many were extremely large. We were rather tired and sat down for a little rest and a doze. 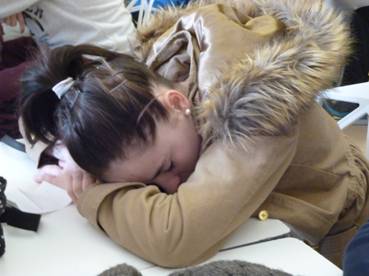 Mr. Murphy was very keen to show us the Egyptian section but Ms. Ryan wanted to show us more of Paris so when she spotted a sign saying “Sortie” we exited.!! 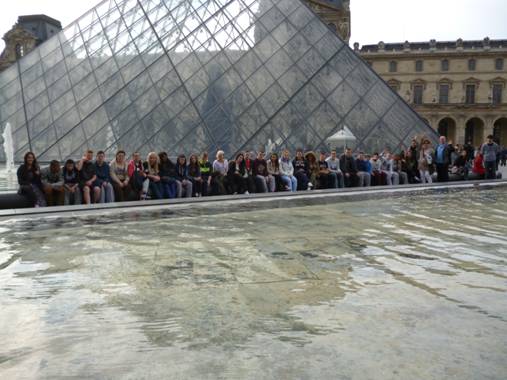 We sat in the beautiful Paris sunshine in the Jardin des Tuileries and had chocolate waffles from a stand. Delicious!! 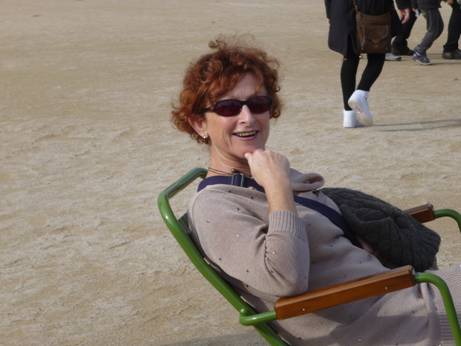 However that was not for long. Next stop the “Bateaux Mouches” for our cruise of the Seine. It was fantastic. Ms. Ryan saved the best until last. We saw all the sights, Notre Dame, Ile St. Louis, Musee D’Orsay, Hotel de Ville, the magnificent bridges and of course the Eiffel tower. The most magnificent bridge was the Pont Alexandre III. There were golden statues of cherubs and winged horses on four corners. We saw the statue of Zoave.  If the level of the water rises above his knees there is danger of flood.

Next stop the Champs Elysees for lunch!! How did we get there? We walked, of course, across busy roads and roundabouts. Ms. Ryan had to adopt her role of superhero  and became the warrior French teacher, as she preserved us all from mortal danger!! Yes a vehicle rushed at us crazily as we crossed a busy roundabout with the lights on green for us. Ms. Ryan saved us with her bare hands and the power of her excellent French.
So on to the extremely busy Champs Elysees and another excellent French meal. You’ve guessed it – Mac Donald’s. 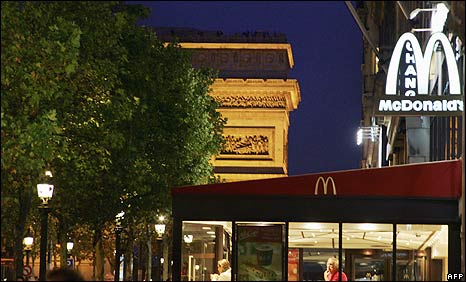 The Champs Elysees was thronged with people and the teachers  were nervous wrecks as they could not see their groups so we got on the nearest metro and headed back to the hotel to go for our plane.
It was a marvelous three days and now the teachers will just be their usual selves again!! They were almost human in Paris !