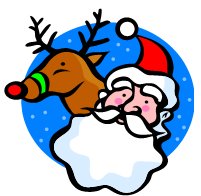 The day before Christmas Eve disaster struck. One of Santa’s main reindeers, Rudolf, was very sick. Santa didn’t know what to do. If Rudolf was sick on the night of Christmas Even how can Santa give everyone their presents for being so good?

But Santa also thought about who will guide his sleigh through the fog and mist. Santa was worried but he knew that his elves could do something and make Rudolf feel better. So that evening Santa called every elf he had into his “special room” as the elves liked to call it and he said to them, “ Listen everyone, poor Rudolf is very sick and we need to invent something to cure him before tomorrow night, or we will get lost in that fog, you hear me now, everyone off to work!”.

So the elves did as Santa told them and went to invent something to cure Rudolf before the night of Christmas Eve! The first elf invented something made from vegetables, but sadly it did not work on Rudolf. The second elf invented something made from fruit. Rudolf ate it but it still didn’t work. Then the third elf thought to himself, “If Rudolf didn’t like fruit or vegetables I’ll make something he will like made from carrots, cookies and a tiny bit of milk.” So the elf did as he thought and gave it to Santa to give to Rudolf. Santa gave it to Rudolf and after five minutes Rudolf was up and running about every where. Rudolf and Santa were so happy that the elves found something to cure him but the bad thing was that everyone stayed up until four o’clock in the morning to cure Rudolf. So after Rudolf was cured everyone went to bed because they had a busy day tomorrow. While everyone was getting ready fro bed Santa thought to himself, “Even if I don’t get any sleep. I think it’s worth it because I love seeing my Rudolf laughing and jumping around everywhere rather than seeing him sick”.