Pompeii is a ruined and partially buried Roman city near modern Naples in the Italian region of Campania, in the territory of the comune of Pompei. Along with Herculaneum, its sister city, Pompeii was destroyed, and completely buried, during a catastrophic eruption of the volcano Mount Vesuvius spanning two days on 24 August 79 AD. The volcano collapsed higher roof-lines and buried Pompeii under many meters of ash and pumice, and it was lost for nearly 1700 years before its accidental rediscovery in 1748.The ruins of Pompeii are situated near the modern suburban town of Pompeii. Today it is some distance inland, but in ancient times it would have been nearer to the coast.

Pompeii and other cities affected by the eruption of Mount Vesuvius. The black cloud represents the general distribution of ash and cinder. Modern coast lines are shown. 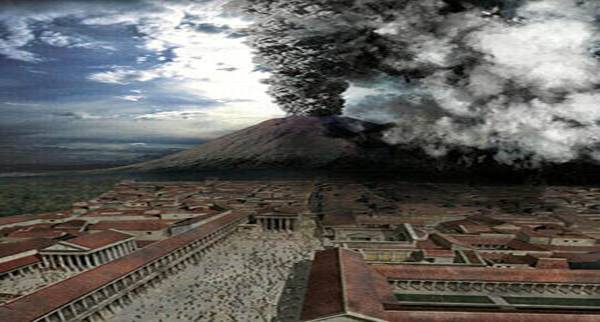 A computer-generated depiction of the eruption of Vesuvius in 79 which buried Pompeii.

By the 1st century, Pompeii was one of a number of towns located around the base of Mount Vesuvius. The area had a substantial population which grew prosperous from the region’s renowned agricultural fertility. Many of Pompeii’s neighbouring communities, most famously Herculaneum, also suffered damage or destruction during the 79 eruption. By coincidence it was the day after Vulcanalia, the festival of the Roman god of fire.Pompeii was the largest of several towns buried by the paroxysmal eruption of Mt. Vesuvius that began at about noon on August 24 of 79 AD. The main phases of the eruption lasted into the next day, and there may have been smaller scale activity in following days — no historical record survives of the immediate aftermath of the explosive first 24 hours. The pumice fall deposits at Pompeii, 8 kilometers south of Vesuvius, were 2.5 to 3 meters deep. Much thicker pyroclastic flow deposits (up to 20 meters deep) overwhelmed Herculanum and other towns on the eastern slope. Tephra (bits of lava and other materials blown out in pyroclastic flows) was found 74 miles away, and finer ash flew for hundred of miles before settling out. The pillar of smoke and ash was visible from Rome, and some people there claimed they had heard the volcano’s rumbling.

“Garden of the Fugitives”. Some plaster casts of victims of the eruption still in actual Pompeii; many are in the Archaeological Museum of Naples.

After thick layers of ash covered the two towns, they were abandoned and eventually their names and locations were forgotten. Then Herculaneum was rediscovered in 1738 by workmen working on the foundation of a summer palace for the King of Naples, Charles of Bourbon, and Pompeii in 1748. These towns have since been excavated to reveal many intact buildings and wall paintings. The towns were actually found in 1599 by Domenico Fontana, who was digging a new course for the river Sarno, but it took more than 150 years before a serious campaign was started to unearth them. 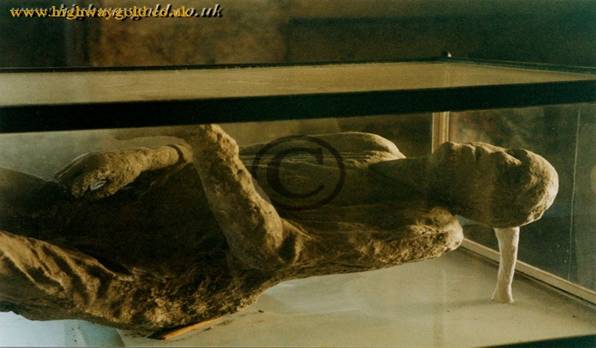 This is a photograph of a fossilized victim of the eruption of Mt. Vesuvius. 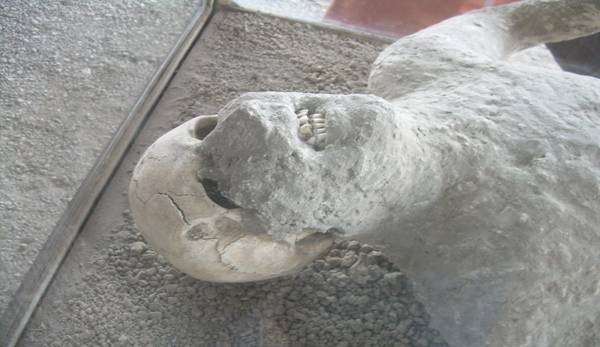 This is a photograph showing another fossilized victim of the eruption of Mt. Vesuvius. This photograph was taking at the scene of the discovery.