The final chapter in the destruction of Hitler’s Third Reich began on April 16, 1945 when Stalin unleashed the brutal power of 20 armies 6,300 tanks and 8,500 aircraft with the objective of crushing German resistance and capturing Berlin. By prior agreement, the Allied armies (positioned approximately 60 miles to the west) halted their advance on the city in order to give the Soviets a free hand. The depleted German forces put up a stiff defense, initially repelling the attacking Russians, but ultimately succumbing to overwhelming force. By April 24 the Soviet army surrounded the city slowly tightening its stranglehold on the remaining Nazi defenders. Fighting street-to-street and house-to-house, Russian troops blasted their way towards Hitler’s chancellery in the city’s center.

Berlin during its fall in 1945 against the USSR.

During the war in Germany, Berlin the battle broke out 16th of January 1945 the red army breached the German front as a result of the Vistula-Oder offensive and advanced westward as much as 40 kilometers  a day, through East Prussia, and upper Silesia, temporarily halting on a line 60 kilometers east of Berlin along the Oder river. During the offensive, two Soviet fronts (army groups) attacked Berlin from the east and south, while a third overran German forces positioned north of Berlin. The Battle in Berlin lasted from 20 April 1945 until the morning of 2 May and was one of the bloodiest battles in history. 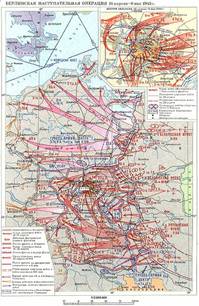 The course of battle in Russian.

The Soviet offensive into central Germany—what later became East Germany—had two objectives. Stalin did not believe the Western Allies would hand over territory occupied by them in the post-war Soviet zone, so he began the offensive on a broad front and moved rapidly to meet the Western Allies as far west as possible. But the overriding objective was to capture Berlin.
On 20 March, General   was appointed Commander-in-Chief of Army Group Vistula replacing Reichsführer-SSHeinrich Himmler. Heinrici was one of the best defensive tacticians in the German army and he immediately started to lay defensive plans. Heinrici correctly assessed that the main Soviet thrust would be made over the OderRiver and along the main east-west Autobahn. He decided not to try to defend the banks of the Oder with anything more than a light skirmishing screen. Instead, Heinrici arranged for engineers to fortify the Seelow Heights which overlooked the Oder River at the point where the Autobahn crossed them. This was some 17 kilometers west of the Oder and 90 kilometers east of Berlin. Heinrici thinned out the line in other areas to increase the manpower available to defend the heights. German engineers turned the Oder’s flood plain, already saturated by the spring thaw, into a swamp by releasing the water from a reservoir upstream. Behind this the engineers built three belts of defensive emplacements. These emplacements reached back towards the outskirts of Berlin (the lines nearer to Berlin were called the Wotan position). These lines consisted of anti-tank ditches, anti-tank gun emplacements, and an extensive network of trenches and bunkers.

The battle lasted for an astonishing 2 weeks until the Germans surrendered on the 2nd of may 1945.
When the Germans surrendered Hitler was hysterical he asked his architect to spread the word that if he was going down Germany was going with him he ordered all buildings to be crushed but it wouldn’t be done. Hitler’s bunker was about to be raided he went into a room with his wife Eva brown and they both committed suicide using cyanide capsules. Whilst this was happening Josef Goebbels was doing the same he killed his children using cyanide then he shot his wife and himself. Hitler’s body was burned along with his wife in a carpet in a ditch his body was taken by the Russians and buried in a German camp bar his skull which Stalin had supposedly kept for himself. 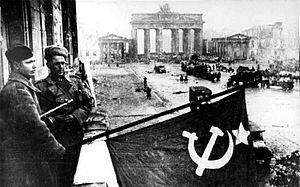 Berlin after the war Russian flag held by the soviets out of a hotel balcony.