Jarrow was a working class town which consisted of 35,000 people. Jarrow earned its money by ship building, steel and coal industries. An economic depression hit in 1936. These industries were in trouble, causing unemployment rates to rise and living standards to fall. There was a massive impact on the town, with an unemployment rate of 67.8%, 6,000 on the dole and 23,000 people dependant on relief.  Mass unemployment and extreme poverty in the north-east of England drove 200 men to march in protest from Jarrow to London, known as ‘The Jarrow Crusade.’ 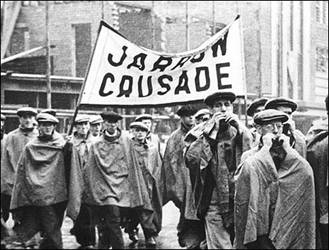 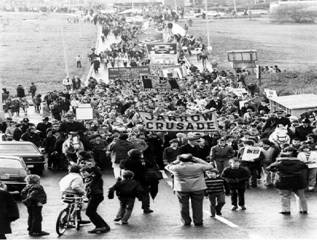 High unemployment meant that the dole payments were costing the government a lot of extra money. Families had to break up as pensions were counted, causing old-age pensioners having to move out of their family home. There were hunger marches, people protest organised by National Unemployed Workers’ Movement during the 1930’s. The Jarrow council tried to distance themselves from this movement because of its communist party connections. People then named this event ‘The Jarrow Crusade’ because the word ‘crusade’ had religious influence and Jarrow was a Catholic town. The marchers were  convinced that something would be done if the British public were made aware of the plight.

The march was to find jobs to support Jarrow men and their families. It was also a bid for respect and recognition, not only for the people of Jarrow, but for others in a similar situation all over the country. A petition was made, which demanded government aid for the town of Jarrow, signed by all people of the town, was carried in an oak box, whilst supporters of the March could add to an additional petition. During the march, wherever the marchers stopped for the night, the local people gave them shelter and food. They also listened to the marchers’ stories and signed the petition on the way. The marchers were supported by a bus which carried cooking equipment and ground sheets for when the march had to stop outside. Many of the men marched in army style, walking for 50 minutes before a ten-minute break, and they held blue and white banners. A harmonica band and frequent singing helped to keep morale of the marchers high. 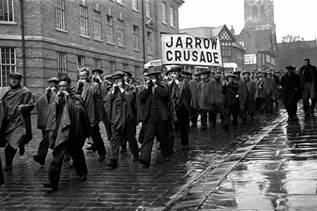 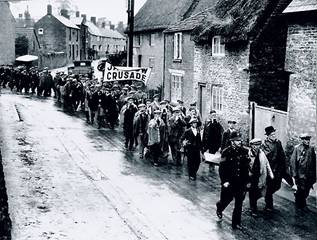 The marchers arrived in London on 31 October, almost a month after leaving. The total number of signatures on the petition was 11,000, and it was handed into Parliament by Wilkinson. The Prime Minister of the day,  refused to see any of the marchers’ representatives, claiming it would set a dangerous precedent. The marchers generally received sympathy, though no proposal was made to help Jarrow, despite the petition being accepted in the House of Commons. The people of the House of Commons shortly resumed to their previous business. It was not until two years after the Jarrow March, in 1938, that a ship breaking yard and engineering works were established in Jarrow. The next year a steelworks was established. However the depression continued in Jarrow until after the beginning of World War II in September 1939, when industrial production increased due to the nation’s need for re-armament.