Robert Gerard Sands commonly known as Bobby Sands was born on the 9th of March 1954 into a “Catholic family in Abbots Cross, Newtownabbey,   Co Antrim, Northern Ireland;” He lived there until 1960 when the family was forced to move to Catchpole, Newtownabbey. Sands had two younger sisters Marcella and Bernadette. Sands parents John and Rosaleen had another son John in 1962.

On leaving school Sands “became an apprentice coach-builder” until he was forced out at gunpoint by loyalists. In June 1972 at the age of 18, Sands moved with his family to the Twin brook housing estate in west Belfast. The family had to leave Rathcoole due to loyalist intimidation. These events would make him a radical nationalist “he joined the IRA”.

Sands married Geraldine Noade and had a son named Gerard who was born on 8th May 1973. Sands commitment to the republican cause put a great strain on his marriage and when his wife Geraldine lost her second child by miscarriage as a result of the stress caused by her husbands IRA activities, their short marriage ended. She soon left to live in England with their son.

In 1972, the year in which was recorded the highest death toll during the Troubles, Sands joined the IRA and in October of that year, Sands was arrested and charged with possession of four handguns which were found in the house in which he was staying. In April 1973 he was sentenced to five years imprisonment.
When released from prison in 1976, Sands “returned to his family home in West Belfast” and took up again his active role in the IRA’s campaign. Sands was charged with involvement in the October 1976 bombing of the Balmoral Furniture Company in Dunmurry, Sands was never convicted, with the  judge stating that there was no evidence to support the claim that Sands had taken part. After the bombing, Sands and at least five others in the bomb team were alleged to have been involved in a gun battle with the R.U.L, although Sands was not convicted again due to lack of evidence. Leaving behind two of their wounded friends, Bobby and Seamus Martin, Gabriel Corbett, Joe McDonnell, Seamus Finucane and Sean Lavery tried to make their escape in a car, but were arrested.
Later one of the revolvers used in the attack was found in the car in which Sands had been travelling. Sands trial in September 1977 saw him being convicted of possession of firearms and Sands was sentenced to fourteen years imprisonment within HM Prison Maze (also known as Long Kesh).

In the prison republican prisoners had organised a number of protests seeking to regain their previous Special Category Status and not be subject to ordinary prison rules. This started with the “blanket protest” in 1976. 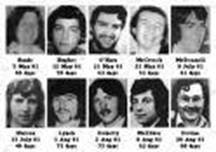 People involved in the ‘Blanket Protest’

In prison, “Sands became a writer both of journalism and poetry” which was published in the Irish republican newspaper An Phoblacht. An example of his poetry

“As the day crawls out another night crawls in
Time neither moves nor dies.
It’s the time of day when the lark sings,
The black of night when the curlew cries.”

In late 1980 Sands was chosen as Officer Commanding of the IRA prisoners in Long Kesh, succeeding Brendan Hughes who was participating in the first hunger strike.
“Sands recorded his diary for the first seventeen days of his hunger strike” in which he detailed his thoughts and feelings on the momentous task that lay ahead of him.
This event that would earn him a place in the annals of Irish history and in the hearts and minds of Irish republican’s world wide.

The duty campaign involved into a hunger strike, The 1981 Irish hunger strike was “led by Bobby Sands” started with Sands “refusing food on 1 March 1981”. Sands decided that other prisoners should join the strike at staggered intervals in order to maximize publicity with prisoners steadily deteriorating successively over several months.

Anti H Block =>The cell the Hunger Strike started in.

” The Hunger Strike centered on the Five Demands:
1. the right not to wear a prison uniform.
2. The right not to do prison work.
3. The right of free association with other prisoners, and to organize      educational and recreational.
4. The right to one visit, one letter and one parcel per week.
5. The right to full restoration of remission lost through the protest.”

“On the 5th of March 1981, Bobby’s weight today is 62 kg. His heart beat is 88 and blood pressure 112/70 … He requested blankets. Said he felt the draft coming in the windows. So the screws put a blanket, on the windows during the night”

Sands recorded his diary for the first seventeen days of his hunger strike in which he detailed his thoughts and feelings on the momentous task that lay ahead of him.This event that would earn him a place in the annals of Irish history and in the hearts and minds of Irish republican’s world wide.
On Sunday the 1st of  March 1981, He wrote “I am standing on the threshold of another trembling world. May God have mercy on my soul”.
My heart is very sore because I know that I have broken my poor mother’s heart, and my home is struck with unbearable anxiety. But I have considered all the arguments and tried every means to avoid what has become the unavoidable: it has been forced upon me and my comrades by four-and-a-half years of stark inhumanity.

Shortly after the beginning of the strike, Frank Maguire the Independent Republican MP for Fermanagh and South Tyrone died suddenly of a heart attack. He had been elected as an M.P to Westminster and his death now meant a by-election has to take place.The sudden vacancy in a seat with a Roman Catholic majority of about five thousand was a valuable opportunity for Sands supporters to unite the nationalist community behind their campaign. Pressure not to split the vote led other nationalist parties notably the S.D.L.P to withdraw and Sands was nominated on the label “Anti H-Block / Armagh Political Prisoner”. After a highly publicized until the process campaign, Sands narrowly won the seat on 9 April 1981, with 30,493 votes to 29,046 for the Ulster Unionist Party candidate Harry West, he had incidentally also become the youngest MP at the time.

Following Sands success the British Government introduced the Representation of the People Act 1981 which prevents prisoners serving jail terms of more than one year in either the UK or the Republic of Ireland from being nominated as candidates in UK elections. This law was quickly introduced so as to prevent the other hunger strikers from being elected to the British parliament.

”On the 5th of May 1981 Sands was pronounced dead in the prison hospital after 66 days of hunger-striking aged 27”. The original pathologist’s report recorded Bobby’s and the other hunger strikers’ causes of death as “self-imposed starvation”, later amended to simply “starvation” after protests from the dead strikers’ families. The coroner recorded verdicts of “starvation as self-imposed”.

”The announcement of his death prompted several days of riots in nationalist areas of Northern Ireland”. “A milkman and his son, Eric and Desmond Guiney, died as a result of injuries sustained when their milk float crashed after being stoned by rioters in a predominantly nationalist area of north Belfast”.
Over 100,000 people lined the route of Sands funeral and he was buried in the ‘New Republican Plot’ alongside 76 others. Their grave is maintained and cared for by the National Graves Association in Belfast. Bobby was a Member of the Westminster Parliament for 25 days, though he never took his seat or the oath.

Thousands Of people paying their respects at Sands Funeral.

In response to a question in the House of Commons on 5 May 1981, British Prime Minister Margaret Thatcher said, “Mr. Sands was a convicted criminal. He chose to take his own life. It was a choice that his organisation did not allow to many of its victims”. The official announcement of Bobby’s death in the House of Commons omitted the customary expression of sense of loss and sympathy with the family of the member. He was survived by his parents, siblings, and a young son (Gerard) from his marriage to Geraldine Node.

Nine other IRA and Irish National Liberation Army (INLA) members who were involved in the 1981 Irish Hunger Strike also died after Sands. On the day of Sands’ funeral, Unionist leader Ian Paisley held a memorial service outside of Belfast city hall to commemorate the victims of the IRA

The media coverage that surrounded the death of Sands resulted in a new period of IRA activity and an immediate escalation in the Troubles, with the group getting  many more members and increasing its fund-raising ability. Both nationalists and unionists began to harden their attitudes and move towards political extremes. Sands’ Westminster seat was taken by his election agent, Owen Carron standing as ‘Anti H-Block Proxy Political Prisoner’ with an increased majority.
The British press hailed the death of Sands and the hunger strike as a triumph for Thatcher, with The Guardian newspaper stating “The Government had overcome the hunger strikes by a show of resolute determination not to be bullied”.However, the death of Sands caused extensive international condemnation of the British government’s handling of the hunger strike, and the relationship between the British and Irish governments was strained . It would take at least 2 decades before it would get better.