In the summer of 1940, Hitler decided to invade Britain. His plan was to take control of the English Channel by destroying the Royal Air force and then to send German troops into Britain to take control.
In July 1940, Hitler put his plan into operation. The German air force (Luftwaffe) began making daily bombing raids on British ships, ports, radar stations, airfields and aircraft factories. This became known as the Battle of Britain.

The Royal Air force took to the skies and there were many battles between British and German planes over the Channel and South Coast. Although British losses were high, German losses were higher and at the beginning of September Hitler decided to try a new tactic to conquer Britain. 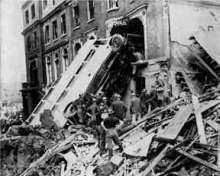 Bombing Raids
Hitler believed that by targeting civilians he could force the British to surrender and on 7th September 1940 began his daily bombing campaign. London was the main target but other major cities were also bombed. Casualties were high. On the first day of bombing 430 people were killed and 1,600 badly injured. 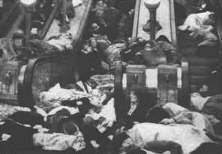 Within a few weeks the daily bombing raids had become nightly raids. Hitler decided to make the bombing raids at night to increase the ‘fear factor’ and also to make people weaker by not allowing them to sleep properly. People in London slept in underground stations for protection. 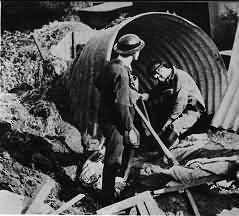 Shelters
There were public shelters in most towns, but many people built Anderson shelters in their gardens so that they had protection if they were unable to get to the public shelter. Anderson shelters were made out of corrugated iron and were very strong. A hole was dug in the garden, then the shelter was placed in the hole and it was covered with earth. An air-raid siren warned people when a raid was about to begin.
The government tried to confuse the German bombers by enforcing a ‘blackout’. Street lamps were switched off, car headlights had to be covered and people had to hang black material in their windows at night so that house lights could not be seen. Going out at night could be dangerous during the blackout; cars crashed into each other and pedestrians, people walked into each other, fell off bridges or fell into ponds.
After May 1941, the bombing raids became less frequent as Hitler turned his attention to Russia. Nevertheless, the effects of the Blitz were devastating. 60,000 people lost their lives, 87,000 were seriously injured and 2 million homes were destroyed.