The path to Bloody Sunday has its roots in the beginning of The Troubles in Northern Ireland. The conflict “is conventionally dated from the late 1960s” and considered by many to have ended with the Belfast agreement of 1998. The principal issues at stake during this time was whether Northern Ireland would remain part of the UK or re-join the Republic of Ireland and the relationship between the Protestant Unionist and Catholic Nationalist communities in the north.
The problem for Catholic’s in Northern Ireland was that the culture of the Northern state was sectarian. The civil rights campaign which began in the mid-1960s attempted to get reform of this by calling for an end to abuses in housing, electoral procedures and discrimination in employment. The Northern Ireland government accused the civil rights movement of being a political front for Republican and Communist organisation.
In an imitation of tactics used by the American Civil Rights Movement, the  NICRA (Northern Ireland Civil Rights Association) held marches, pickets, and protests to pressure the Government on the following areas:

By March 1971, Chichester-Clark resigned and was replaced by Brian Faulkner. Unrest in the province had achieved a new level, prompting the new Prime Minister to reintroduce internment. On 9 August 1971. It was a disaster. Because it failed to capture any significant members of the IRA and in its focus on nationalist – rather than loyalist – suspects.
On “30th January 1972 in Derry” “a group of volunteers put together a march against internment” in Derry. The organisers’ original intention was that the march would form up on the Creggan Estate behind a coal delivery lorry carrying the main speakers and bearing a NICRA banner. The march would then make its way down to William Street on the edge of the Bogside, and on to the Guildhall in the city centre.

Although there were many IRA men present at the protest, it is claimed they were all unarmed, apparently because it was anticipated that the paratroopers would attempt to “draw them out”. March organizer and MP Ivan Cooper had ordered stewards to “keep the peace on that day”. One paratrooper later gave evidence at testified that they were told by an officer to expect a gunfight and “We want some kills”. In the event, one man was witnessed by Father Edward Daly and others haphazardly firing a revolver in the direction of the paratroopers. Later identified as a member of the Official IRA, this man was also photographed in the act of drawing his weapon, but was not seen by the soldiers. Various other claims have been made to the Saville Inquiry about gunmen on the day.
The city’s coroner, retired British Army Major Hubert O’Neill, issued a statement on 21 August 1973, at the completion of the inquest into the people killed. He declared: This Sunday became known as Bloody Sunday and bloody it was. “The event is sometimes called the Bogside Massacre” It was quite unnecessary. It strikes me that the Army ran amok that day.
“Immediately after the killings the British government announced the appointment of Lord Widgery, then Lord Chief Justice, to undertake an inquiry into the events of the day.” Widgery’s quickly produced report — completed within ten weeks and published within eleven – supported the Army’s account of the events of the day and “refused over 700 eyewitness accounts”. Most Irish people and witnesses to the event disputed the report’s conclusions. These conclusions were “hastily convened”.
“In 1992, John Major, writing to John Hume stated:
The Government made clear in 1974 that those who were killed on ‘Bloody Sunday’ should be regarded as innocent of any allegation that they were shot whilst handling firearms or explosives. I hope that the families of those who died will accept that assurance.” 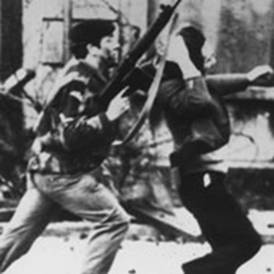