“Columbus was born in 1451 in Genoa. His father was Domenico Colombo, a wool weaver who worked in Genoa. Christopher’s mother was Susanna Fontanarossa.” One problem with studying his early childhood is Columbus never wrote in his main language for some reason. Genoese documents have been found about a weaver named Colombo, however documents in his own hand show that Columbus wrote almost exclusively in Spanish, and that he used Spanish, with Portuguese or Catalan phonetics, even when writing personal notes to himself, to his brother, Italian friends, and to the Bank of Genoa. His two brothers also supposed wool-weavers from Genoa never wrote Italian either but Spanish. So it is unknown what his native language actually was. In one of his writings Columbus said he went to sea at the age of 10. 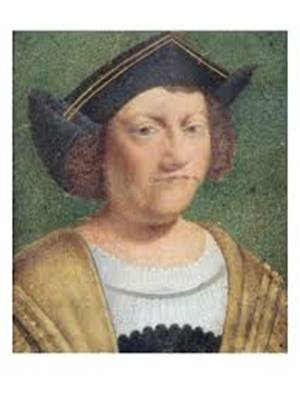 “Most of Christopher Columbus’ childhood remains a mystery, though some of his biographers, including the explorer’s son, decided to make up their own stories.” Some things about the childhood of Columbus is accepted an fact. People at his age, noted that he was the oldest son born to his parents, and that he had blue eyes, red hair, and was tall. Unfortunately, no paintings of Columbus were made while he was alive so later artists had to use their memories to paint him.

“Even though his family heritage was respectable, Columbus and his son often told stories of his noble past. Columbus’ son Ferdinand wrote that the Columbuses “were persons of worth who had been reduced to poverty”,” but he provided no evidence to support his claim. Columbus claimed his birthplace as Genoa but never mentioned his family background, likely out of worry that people from wealthy families were more highly thought of, in fifteenth century Europe. Yet as even Ferdinand Columbus realized, his father’s accomplishments were great regardless of his family origins.

His father was not a rich man, but he was able to send Christopher, as a kid, to the University of Pavia, and there he studied grammar, geometry, geography and navigation, astronomy and the Latin. But this was as a boy studies. In his fourteenth year he left the university and entered, in work, on “the larger college of the world.” If the date given above, of his birth, is correct, this was in the year 1465, a few years before the Turks took Constantinople, and, in their invasion of Europe, affected the daily life of everyone, young or old, who lived in the Mediterranean countries.

“From this time, for fifteen years, it’s hard to trace along the life of Columbus.” It was the life of an intelligent young sailor, going wherever there was a voyage for him. He says himself, “I passed twenty-three years on the sea. I have seen all the Levant, all the western coasts, and the North. I have seen England; I have often made the voyage fromLisbon to the Guinea coast.” This he wrote in a letter to Ferdinand and Isabella. Again he says, “I went to sea from the most tender age and have continued in a sea life to this day. Whoever gives himself up to this art wants to know the secrets of Nature here below. It is more than forty years that I have been thus engaged. Wherever any one has sailed, there I have sailed.”
In 1470, Columbus moved to Savona. The same year, Columbus was on a Genoese ship hired in the service of Rene I of Anjou to support his attempt to take over the Kingdom of Naples. Some modern historians argue that he was from Portugal or Spain.
“In 1473, he began his career as business agent for the important Centurione, Di Negro and Spinola families of Genoa. “ Later he went on a trip to Chios, a Genoese colony in the Aegean Sea.” In 1476, he joined in an armed convoy sent by Genoa to carry a valuable package to northern Europe. He landed in Bristol, England – Galway, Ireland and was in Iceland in 1477. In 1479 Columbus reached his brother Bartolomeo in Lisbon, while continuing the trade for the Centurione family.
“He married Filipa Moniz Perestrelo, the Porto Santo governor and Portuguese nobleman of Genoese origin Bartolomeu Perestrello’s daughter.” In 1479 or, his son Diego Columbus was born. Between 1482 and 1485 Columbus traded along the coast of West Africa, reaching the Portuguese trading post of Elmina at the Guinea coast. Records report that Filipa died in 1485. It is also thought that Columbus may have simply left his first wife. In either case Columbus found a mistress in Spain in 1487, a 20-year-old orphan named Beatriz Enríquez de Arana.
Columbus eventually learned Latin, as well as Portuguese and Castilian, and read a lot about astronomy, geography, and history, including the works of Ptolemy, Cardinal Pierre d’Ailly’s Imago Mundi, the travels of Marco Polo and John Mandeville, Pliny’s Natural History, and Pope Pius II’s Historia Rerum Ubique Gestarum. According to historian Edmund Morgan. Columbus was not a scholarly man, but he studied these books, made hundreds of marginal notations in them and came out with ideas about the world that were characteristically simple and strong and sometimes wrong. The kind of ideas, that most people at that time didn’t quite believe in, as they “self educated” themselves, and often got the wrong ideas.
“On 1st of may, 1486, Columbus presented his ideas to queen Isabella, who referred to a committee.” 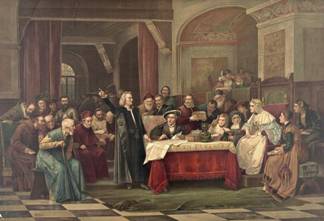 After some time, people from Spain and Portugal said that Columbus had underestimated the distance to Asia too much, and recommended the royal highness to pass on this voyage. However, to keep Columbus from taking his ideas elsewhere, and perhaps to keep their options open, the Catholic Monarchs gave him an annual allowance of 12,000 maravedis -Spanish money at the time – and, in 1489, furnished him with a letter ordering all cities and towns under their domain to provide him food and lodging at no cost. After 2 years of negotiations, he was successful in 1492. 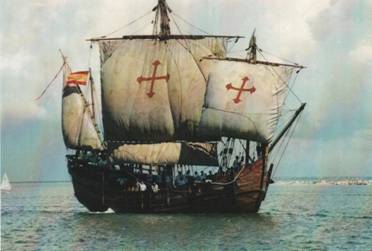 “On the evening of 3rd of August in 1492, Columbus left Palos de la Frontera with three ships, the Santa Maria, and two smaller caravels, the Pinta, and the Santa Clara. He took enough food for one year. He was ready to sail.” The monarchs forced the Palos inhabitants to contribute to the expedition. The Santa María was owned by Juan de la Cosa and controlled by Columbus. The Pinta and the Nina were used by the Pinzon brothers, Martin Alonso and Vicente Yanez. Columbus first sailed to the Canary Islands, which belonged to the Castile, where he set up a fort from the 2 other ships, Pinta, and Santa Clara and made repairs to the Santa Maria. After stopping over in Gran Canaria, he finally departed from San Sebastian de La Gomera on 6th of September, for what turned out to be a five-week voyage across the ocean.

“A lookout on the Pinta, Rodrigo de Triana, also known as Juan Rodriguez Bermeo, spotted land about 2:00 in the morning of the 12th in October, and warned the rest of the crew with a shout. The captain of the Pinta, Martin Alonso Pinzon, confirmed the discovery and alerted Columbus by firing a lambard.” Columbus later claimed that he already saw a dim light on the land a couple of hours earlier, therefore claiming for himself the lifetime pension promised by Ferdinand and Isabella to the first person to sight land. Columbus called the island, in what is now The Bahamas, San Salvador. “He thought he found the indies and named the people he saw there, indians.”

“Columbus did not intend to remain long at San Salvador. His landfall there, although it signified the realization of one part of his dream, was only the starting-point of his explorations in the New World. Now that he had made good his undertaking to “discover new lands,” he had to make good his assurance that they were full of wealth and would swell the revenues of the King and Queen of Spain.”

The natives called it Guanahani. It is unknown exactly which island the landed on, prime candidates are Samana Cay, Plana Cays, or San Salvador Island, so named in 1925 in the belief that it was Columbus’ San Salvador.
The people he encountered, the Lucayan, Taino or Arawak, were peaceful and friendly. From the 12th of October 1492 entry in his journal he wrote of them, “Many of the men I have seen have scars on their bodies, and when I made signs to them to find out how this happened, they indicated that people from other nearby islands come to San Salvador to capture them. They defend themselves the best they can. I believe, that people from the mainland come here to take them as slaves. They ought to make good and skilled servants, for they repeat very quickly whatever we say to them. I think they can very easily be made Christians, for they seem to have no religion. If it pleases our Lord, I will take six of them to Your Highnesses when I depart, in order that they may learn our language”. He noted that this absence of modern weaponry and even metal forged swords or pikes was a tactical vulnerability, writing, “I could conquer the whole of them with 50 men, and govern them as I pleased.”

“Columbus haven’t became as rich as he wanted. At his end days he only had a pension the king and the queen gave him because he discovered america. In the last few months he was in big pains, so he spent them in bed.”
“On the 20th of May, 1506, at the age 54, Columbus died in Valladolid, Spain.” Columbus’ remains were first buried at Valladolid, then at the monastery of La Cartuja, in Seville, Spain, as his son, Diego wanted it, who had been governor of Hispaniola. 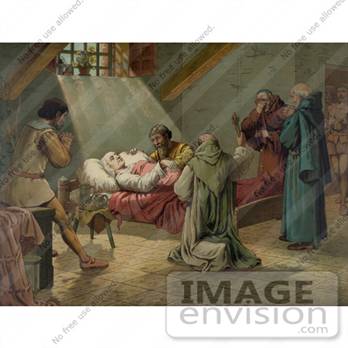 “In 1542 the remains were taken to Colonial Santo Domingo, today called, Dominican Republic.” In 1795, when France took over the island of Hispaniola, Columbus’ remains were moved to Havana, Cuba. After Cuba became independent following the Spanish-American War in 1898, the remains were moved back to Spain, to the Cathedral of Seville, where they were put on an elaborate catafalque, but a lead box containing an inscription identifying “Don Christopher Columbus” and containing bone fragments and a bullet was found at Santo Domingo, in 1877. To lay to rest claims that the wrong relics had been moved to Havana and that Columbus’ remains had been left buried in the cathedral at Santo Domingo, DNA samples of the corpse resting in Seville were taken in June 2003 as well as other DNA samples from the remains of his brother Diego and younger son Fernando Colon.
Historians have argued that Columbus remained convinced to the very end that his journeys had been along the east coast of Asia, but writer Kirkpatrick Sale argues that a document in the Book of Privileges shows Columbus knew he found a new continent.
“Yet among none-native Americans, they still consider Columbus as founder of America. Columbus was left behind many cultures and civilizations of the native Americans, as well as the Western world’s Vikings at L’Anse aux Meadows. He is regarded more accurately as the person who brought America to the front of the west’s attention.”