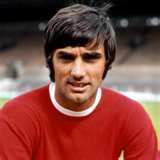 George Best (22 May 1946 – 25 November 2005) was a Northern Irish football international who is mainly remembered for his time with Manchester United F.C. He is widely regarded as one of the greatest players in the history of the game. He played for United between 1963 and 1974, helping them to win the Football League Championship in 1965 and 1967, and the European Cup in 1968. The same year, he was named European Footballer of the Year and Football Writers’ Association Player of the Year.

George Best was born on the 22nd of May 1946 into a working class Protestant family in post war Belfast, Northern Ireland. He was the first child of Dickie Best and Anne Best Withers, and grew up in Cregagh, Belfast. Best had four sisters, Carol, Barbara, Julie and Grace, and a brother, Ian. Best’s father Dickie died on 16 April 2008, at the age of 88, in the Ulster Hospital in Dundonald, Northern Ireland. He had been admitted to hospital four weeks earlier. Best’s mother Anne died from alcoholism-related heart disease[7 1978, aged 55.In the so ordinary surroundings of his childhood his time  spent playing football in the terraced streets of his home city gave little indication that the young George Best would go on to become one of the world’s most famous (and infamous) sporting heroes.

In 1957, at the age of 11, the Best passed the 11 plus and went to Grosvenor High School, but he soon skipped school as the school specialised in rugby. Best then moved to Lisnasharragh Secondary School, reuniting him with friends from primary school and allowing him to focus on football.

In 1966-67, with George permanently stationed at right wing, Manchester won the FA Cup with a 6-1 trouncing of West Ham in the final. They advanced to the semis of the European Cup again in 1968 and this time they won, beating Real Madrid. The final against Benfica pitted George against the great Eusebio again. After Charlton opened the scoring, Eusebio netted the equalizer. The game was knotted 1-1 after 90 minutes, thanks to a pair of brilliant saves by Alex Stepney on Eusebio shots. In extra time, George scored on an astonishing solo effort to break the game open, and Manchester scored twice more before the final whistle blew for a 4-1 triumph. On his goal, George received the ball with his back to the defence, spun around his man, faked the keeper out of his shorts and neatly banged the ball home.

George was voted England’s—and Europe’s—Footballer of the Year for 1968. After the Benfica victory, he was spotted wearing a stupid oversized sombrero with his jet-black bangs hanging out from underneath. The press dubbed him “El Beatle,” and the nickname stuck. George’s fame by this time had spread all over the world. He received as many as 10,000. He was capped 37 times for Northern Ireland scoring nine goals. Of his nine international goals four were scored against Cyprus and one each against Albania, England, Scotland Switzerland and turkey.

On 15 May 1971, Best scored possibly the most famous “goal” of his career at Windsor park in Belfast against England As Gordon banks, the English goalkeeper, released the ball in the air in order to kick the ball downfield, Best managed to kick the ball first, which sent the ball high over their heads and heading towards the open goal. Best outpaced Banks and headed the ball into the empty goal, but the goal was disallowed by referee Alistair Mackenzie.

Best continued to be selected for Northern Ireland throughout the 1970s, despite his fluctuating form and off pitch problems. There were still glimpses of his genius; in 1976, Northern Ireland were drawn against Holland in Rotterdam as one of their group qualifying matches for the 1978 fifa world cup . Holland – midway between successive World Cup final appearances – and Johan Cryuff were at their peak at the time. Five minutes into the game Best received the ball wide on the left. Instead of heading towards goal he turned directly infield weaved his way past at least three Dutchmen and found his way to Cruyff who was wide right. Best took the ball to his opponent, dipped a shoulder twice and slipped it between Cruyff’s feet – nutmegging arguably the best player in the world at that time. Best was considered briefly by manager Billy Bingham for the1982 world cup. At 36 and with his football skills dulled by age and drink, he was not selected in the Northern Ireland squad.

In 1974, the 27-year-old Best was sacked by United for excessive drinking and persistent failure to attend training sessions and matches. Over the next decade, Best drifted between several football clubs including Fulham, Stockport County, Dunstable Town, Hibernian, Los Angeles Aztecs, San Jose Earthquakes and finally Bournemouth until he retired from football in 1983 at the age of 37.

In 1984, Best received a three-month prison sentence for drunk driving, assaulting a police officer and failing to answer bail. He spent Christmas 1984 behind bars and turned out as a player for Ford Open Prison. In 1991, he appeared on an edition of prime time BBC chat show Wogan in which he swore and was clearly drunk. He later apologised and said this was one of the worst episodes of his alcoholism. In 2002, he had a liver transplant. In 2003 he was the focus of much criticism when, despite his transplant, he openly drank white wine spritzers and was accused of being selfish and having no regard for other people’s feelings.

Best continued to drink, and was often seen at his local pub in Petersfield, Hampshire. On 3 October 2005 Best was admitted to intensive care at the private Cromwell Hospital in London, suffering from kidney problems caused by the side-effects of drugs used to prevent his body from rejecting his transplanted liver. (The drugs specifically suppress the immune system, reducing the chance of rejection, but increasing the risk of other infections).

On 27 October 2005 there were early editions of the morning newspapers which stated that Best was close to death and had sent farewell messages to loved ones. Best’s condition did seem to improve, but in November 2005, his condition deteriorated. In the early hours of 25 November 2005 treatment was stopped; he eventually died, aged 59, after a battle that lasted longer than doctors had expected, at 13:06 GMT that day as a result of a lung infection and multiple organ failure.

The FA Premier League announced that a minute’s silence would be observed before all Premier League games to be held over the weekend of his death; this was ignored at many grounds, in favour of a minute’s applause in his honour. The first match at Old Trafford after Best’s death was a League Cup tie against West Bromwich Albion, the club against which he made his début for Manchester United in 1963. The match, which United won, was preceded by tributes from former team-mate Sir Bobby Charlton. Best’s son Calum and former team-mates, surviving members from the West Bromwich Albion team which he played against in his début, all joined the current united squad on the pitch for a minute’s silence, during which fans held aloft pictures of Best, which were given out before the match.

His body left the family home at Cregagh Road, East Belfast, shortly after 10 a.m. UTC on Saturday, 3 December 2005. The cortege then travelled the short distance to Stormont. The route was lined with around 100,000 mourners. There was an 11 a.m. service in the Grand Hall relayed to around 25,000 mourners inside the grounds of Stormont. As the cortege left Stormont, the Gilnahirk pipe band played. The Funeral was live on several TV stations including BBC One. Afterward, Best was buried beside his mother Annie Elizabeth Kelly in a private ceremony at the hill-top Roselawn Cemetery, overlooking east Belfast.