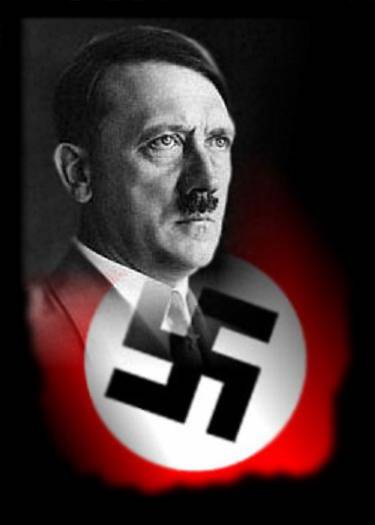 Adolf Hitler was born in Braunau in Austria, on 20 April 1889. The son of a fifty two year old Austrian customs Alois Schickelgruber, Hitler and his third wife, Klara Poelzl both from the backwoods of lower Austria. The young Hitler was a resentful, moody, lazy of unstable temperament, he was deeply hostile towards his strict, authoritarian father and strongly attached to his indulgent, hard-working mother, whose death from cancer in December 1908 was a shattering for young Hitler.
After spending four years in the Realschule in Linz, he left school at the age of sixteen with dreams of becoming a painter. Angry at his rejection by the Viennese Academy of Fine Arts, he was to spend five years in Vienna as he later recalled, taking up a view of life which changed very little in the ensuing years, hatred towards the Jews and Marxists.

In Vienna he took upon his first education in politics by studying the demagogic techniques of the popular Christian-social Mayor, Karl Lueger, and picked up the stereotyped, obsessive anti-Semitism with its brutal, violent sexual connotations and concern with the purity of blood that remained with him to the end of his career. Young Hitler learned to blame the Eternal Jew the symbol and cause of all chaos corruption and destruction in culture, politics and the economy.
In May 1913 Hitler left Vienna for Munich and, when war broke out in August 1914, he joined the Sixteenth Bavarian serving as a despatch runner. Hitler proved an able, courageous soldier, receiving the Iron Cross (First Class) for bravery, but did not rise above the rank. Twice wounded, he was badly gassed four weeks before the end of the war and spent three months in a hospital in Pomerania. Temporarily blinded and driven to impotent rage by the abortive November 1918 revolution in Germany as well as the military defeat, Hitler once in full health was convinced that fate had chosen him to rescue his nation from the shackles of the Versailles Treaty, from Bolsheviks and Jews.

Assigned by the Reichswehr in the summer of 1919 duties which consisted largely of spying on political parties in the post-revolutionary Munich, Hitler was sent to investigate a small nationalistic group of idealists, the German Workers’ Party. On 16 September 1919 he joined the Party which had just about forty members, soon changed its name to the National Socialist German Workers’ Party NSDAP and became its Chairman by July 1921.

By November 1921 Hitler was recognized as Fuhrer of a movement which had 3,000 members  and strenteded his  personal power by organizing strong- arm squads, Hitler focused his propaganda against the Versailles Treaty, the November criminals, the Marxists and the visible, internal enemy No. 1, the “Jew,” who was responsible for all Germany’s domestic problems.

In January 1925 the ban on the Nazi Party was removed and Hitler regained permission to speak in public. Hitler re-established himself in 1926 as the ultimate arbiter to whom all factions appealed. Though the Nazi Party won only twelve seats in the 1928 elections, the onset of the Great Depression with its devastating effects on the middle classes helped Hitler to win over all those strata in German society who felt their economic existence was threatened. The Nazis in 1929 began to win over the big industrialists, nationalist conservatives and army circles. producing mass unemployment, social dissolution, fear and indignation.
Hitler played on national resentments, feelings of revolt and the desire for strong leadership using all the most modern techniques of mass persuasion to present himself as Germany’s redeemer and messianic saviour.In the 1930 elections the Nazi vote jumped dramatically from 810,000 to 6,409,000 and they received 107 seats in the Reichstag. The following month Hitler officially acquired German citizenship and decided to run for the Presidency, receiving 13,418,011 votes in the run-off elections of 10 April 1931 as against 19,359,650 votes for the victorious von Hindenburg.

Once in the throne, Hitler moved with great speed to outmanoeuvre his rivals, abolishing the free trade unions, eliminating the communists, Social Democrats and Jews from any role in political life and sweeping opponents into concentration camps. With support from the nationalists, Hitler gained a majority at the last elections held in Germany on 5 March 1933 and with cynical skill he used the whole gamut of persuasion, propaganda, terror and intimidation to secure his hold on power.
The destruction of the radical SA leadership under Ernst Rohm in the Blood Purge of June 1934 confirmed Hitler as undisputed dictator of the Third Reich and by the beginning of August, when he united the positions of Fuhrer he had all the powers of State in his hands. During the next four years Hitler enjoyed a dazzling string of domestic and international successes, outwitting rival political leaders abroad just as he had defeated his opposition at home.
In 1935 he persuaded Great Britain to allow an increase in the naval building programme and in March 1936 he occupied the demilitarized Rhineland without meeting opposition. He began building up the Luftwaffe and supplied military aid to forces in Spain, which brought about the Spanish fascist victory in 1939.
The next designated target for Hitler’s ambitions was Poland her independence guaranteed by Britain and France and, to avoid a two-front war, the Nazi dictator signed a pact of friendship and non-aggression with Soviet Russia. On 1 September 1939 German armies invaded Poland and henceforth his main energies were devoted to the conduct of a war he had unleashed to dominate Europe and secure Germany’s living space.

The first phase of World War II was dominated by German tactics, sudden shock attacks against airfields, communications, military installations, using fast mobile armor and infantry to follow up on the first wave of bomber and fighter aircraft. Poland was overrun in less than one month, Denmark and Norway in two months, Holland, Belgium, Luxemburg and France in six weeks. After the fall of France in June 1940 only Great Britain stood firm.

The Battle of Britain, in which the Royal Air Force prevented the Luftwaffe from securing aerial control over the English Channel, was Hitler’s first setback, causing the planned invasion of the British to be postponed. Hitler turned to the Balkans and North Africa where his Italian allies had suffered defeats, his armies rapidly overrunning Greece, Yugoslavia, and the island of Crete and driving the British from Cyrenaica. As the war widened the United States by the end of 1941 had entered the struggle against the Axis powers Hitler identified the totality of Germany’s enemies with international Jewry who supposedly stood behind the British American Soviet alliance.

Within a few months of the invasion Hitler’s armies had extended the Third Reich from the Atlantic to the Caucasus, from the Baltic to the Black Sea. But the Soviet Union did not collapse as expected and Hitler, instead of concentrating his attack on Moscow, ordered a pincer movement around Kiev to seize the Ukraine, increasingly changing his mind about objectives.

Hitler now assumed personal control of all military operations, refusing to listen to advice, disregarding unpalatable facts and rejecting everything.
Convinced that his own General Staff was weak and indecisive, if not openly treacherous, Hitler became more proud to outbursts of blind, towards his generals when he did not retreat, German defeat which became apparent in mid-1942.
The Allied invasion of Normandy followed on June 6, 1944 and soon a million Allied troops were driving the German armies eastwards, while from the opposite direction the Soviet forces advanced relentlessly on the Reich. The total mobilization of the German war economy under Albert Speer and the energetic propaganda efforts of Joseph Goebbels to rouse the fighting spirit of the German people were impotent to change the fact that the Third Reich lacked the resources equal to a struggle against the world alliance which Hitler himself had provoked.

As disaster came closer, Hitler buried himself in the unreal world of the Fuhrerbunker in Berlin. As the Red Army approached Berlin and the Anglo-Americans reached the Elbe, on 19 March 1945 Hitler ordered the destruction of what remained of German industry, communications and transport systems. He was resolved that, if he did not survive, Germany too should be destroyed.
On April 29, 1945, he married his mistress Eva Braun and dictated his final political testament. The following day Hitler committed suicide, shooting himself through the mouth with a pistol. His body was carried into the garden of the Reich Chancellery by aides, covered with petrol and burned along with that of Eva Braun.