On September 1st 1939 Germany began its invasion of Poland and gave beginning of World War II in Europe. 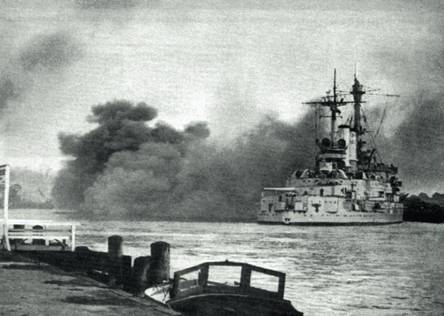 Around 4 o’clock German battleship Schleswig-Holstein sailed to Gdańsk under the pretext of a courtesy visit and anchored in the channel 150m from Westerplatte. Battleship suddenly opened broadside salvo fire on the Polish garrison held by 182 soldiers and 27 civilian reservists. Group of less then 200 soldiers was supposed to defend Westerplatte for few hours indeed they were fighting for 7 days. The Polish army was defeated within weeks of the invasion.

From East Prussia and Germany in the north and Silesia and Slovakia in the south, German units, with more than 2,000 tanks and over 1,000 planes, broke through Polish defenses along the border and advanced on Warsaw in a massive encirclement attack. After heavy shelling and bombing, Warsaw surrendered to the Germans on September 27, 1939. Britain and France, standing by their guarantee of Poland’s border, had declared war on Germany on September 3, 1939. The Soviet Union invaded eastern Poland on September 17, 1939. The demarcation line for the partition of German- and Soviet-occupied Poland was along the Bug River.

Nazi Germany occupied the remainder of Poland when it invaded the Soviet Union in June 1941. Poland remained under German occupation until January 1945.