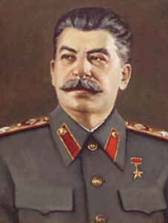 Josef Stalin suffered a bout of smallpox when he was seven and this permanently scarred his face. At the age of twelve, his left arm suffered permanent damage due to two carriage accidents. At sixteen, he began writing poetry and openly rebelled against the imposition on the general public to speak Russian.

His rather infamous non-aggression pact signed with the Nazi dictator Adolf Hitler in 1939 was something that the Allies did not expect or appreciate, during World War II. The resultant Soviet invasion of Poland, Bukovina, Finland and the Baltic countries, was only part of the territorial expansion scheme. Once Germany violated the pact in 1941, Stalin rejoined the Allies; not only playing a major role in the defeat of the Axis Powers, but also becoming responsible for the largest death toll in the world! In 1906, Stalin temporarily resigned from the party. He organized partisan activities and even indulged in the murders of the Tsar’s right-wing supporters. He was arrested in 1908, but after seven months in prison, he escaped the exile in Siberia. Stalin was responsible for the issue of controversial military orders like ‘shoot deserters, while the family members are arrested’ and ‘shoot for cowardice without a trial’. The ‘Great Terror’ or ‘Great Purge’ launched by Josef Stalin was announced as a campaign to get rid of corruption and treachery from Soviet society, but it is a well known fact that the step was taken in the direction of doing away with opposition. Targets were either executed, deported, exiled or imprisoned. After the Second World War came to an end in 1945, Stalin influenced the formation of communist governments in many parts of Eastern Europe. Thus, formed the Eastern Bloc or the Iron Curtain. The subsequent period of antagonism was not only long, but also one that took the form of a Cold War between the Communist and Capitalist nations. The latter were led and influenced by America.

He depended on increased power of his secret police and intelligence networks in major world nations. The latter was called the Rote Kappelle spy ring and operated within Great Britain, the United States, France and Japan. Stalin started a Communist International Movement to infiltrate and ensure that Communist parties set up in foreign countries remain pro-Stalin. Numerous towns, cities and villages were renamed after Stalin. He also incorporated the Stalin Peace Prize in his honor. He honored himself with grandiloquent titles such as ‘Father of Nations’, ‘Coryphaeus of Science’, Brilliant Genius of Humanity’ and ‘Great Architect of Communism’. Stalin’s name was included in the National Anthem and he was made the focus of literature, music and film.

Stalin is best known for his five year plans that he designed for the rapid industrialization of Russia, to overcome the Great Depression. He is credited with launching economic rejuvenation to take care of a period full of disrupted food production and unemployment. Stalin imposed collectivization of agriculture to deal with the shortage of food crops, post World War II. Stalin’s government took on the task of financing large scale industrialization to generate employment and improve manufacturing processes. This helped to raise the economic base. The development of new products and improved efficiency increased production and subsequently, profitability. Girls were given adequate education and women enjoyed equal employment rights. The health care initiatives saw occurrences of diseases drop to low numbers.

Stalin joined the Bolsheviks and worked against the Mensheviks during the Russian Revolution. When he met Lenin at a Bolshevik conference, Stalin began to raise money for the party plans via planned bank robberies and extortions. He created a newspaper called Pravda, and published editorials seeking reconciliation between the Mensheviks and Bolsheviks. This angered Lenin and Stalin was removed from the editorial. Stalin supported Lenin in overthrowing the provisional government and even helped Lenin to evade arrest. After Civil War victory, the Bolsheviks were led by Stalin in a territorial expansion spree. Lenin disliked Stalin’s extremist policies. However, when Lenin suffered a stroke in 1922, his relationship with Stalin deteriorated over disagreement on Stalin’s rudeness, assimilation of power, overambitious nature and politics. When Lenin died on January 21, 1924, Stalin began focusing on building a communist bloc.
Death Controversies:

On March 1, 1953, Stalin did not emerge from his room, after dinner. He suffered paralysis of the right side of his body. The controversies surrounding Stalin’s death include a view point that he had ingested a strong rat poison called warfarin. The poison supposedly is responsible for coagulation of blood and subsequently, cerebral hemorrhage. However, the facts on Stalin’s death continue to be viewed with a lot of uncertainty.