Limestone can also form through evaporation. Stalactites, stalagmites and other cave formations (often called “speleothems”) are examples of limestone that formed through evaporation. In a cave, droplets of water seeping down from above enter the cave through fractures or other pore spaces in the cave ceiling. There they might evaporate before falling to the floor. When water evaporates, any calcium carbonate that was dissolved in the water will be deposited on the cave ceiling. Over time this evaporative process can result in an accumulation of icicle shaped calcium carbonate on the ceiling. These deposits are known as stalactites.

Today the earth has many limestone forming enviroments. Most of them are found in the shallow water areas between 30 degrees north latitude and 30 degrees south latitude. Limestone is forming in the Caribbean Sea, Indian Ocean, Persian Gulf, Gulf of Mexico, around Pacific Ocean islands and within the Indonesian archipelago.
One of these areas is the Bahamas platform, located in the Atlantic ocean about 100 miles southeast of southern Florida. 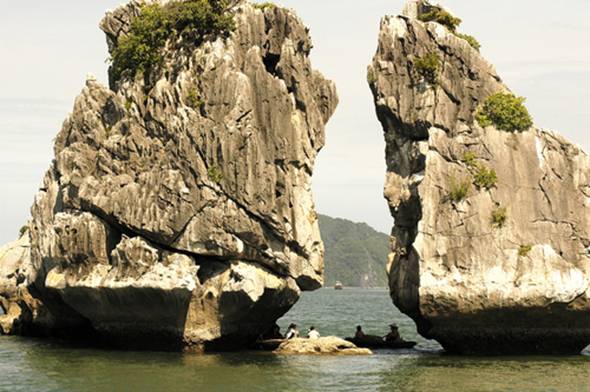