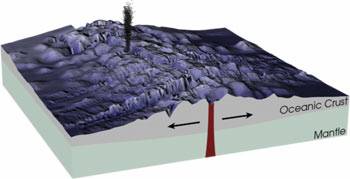 A Mid-Oceanic Ridge (MOR) is a general term for an underwater mountain system that consists of various mountain ranges, typically having a valley known as a rift running along its spine, formed by plate tectonics. This type of oceanic ridge is characteristic of what is known as an oceanic spreading center, which is responsible for seafloor spreading. The uplifted seafloor results from convection currents which rise in the mantle as magma at a linear weakness in the oceanic crust, and emerge as lava, creating new crust upon cooling. A mid-ocean ridge demarcates the boundary between two tectonic plates, and consequently is termed a divergent plate boundary. 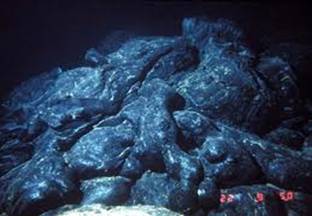 Mid-ocean ridges are geologically active, with new magma constantly emerging onto the ocean floor and into the crust at and near rifts along the ridge axes. The crystallized magma forms new crust of basalt (known as MORB for Mid-Ocean Ridge Basalt) and gabbro.

The rocks making up the crust below the sea floor are youngest at the axis of the ridge and age with increasing distance from that axis. New magma of basalt composition emerges at and near the axis because of decompression melting in the underlying Earth’s mantle.
The oceanic crust is made up of rocks much younger than the Earth itself: most oceanic crust in the ocean basins is less than 200 million years old. The crust is in a constant state of “renewal” at the ocean ridges. Moving away from the mid-ocean ridge, ocean depth progressively increases; the greatest depths are in ocean trenches. As the oceanic crust moves away from the ridge axis, the peridotite in the underlying mantle cools and becomes more rigid. The crust and the relatively rigid peridotite below it make up the oceanic lithosphere.
Slow spreading ridges like the Mid-Atlantic Ridge generally have large, wide rift valleys, sometimes as big as 10–20 km wide and very rugged terrain at the ridge crest that can have relief of up to a 1,000 m. By contrast, fast spreading ridges like the East Pacific Rise are narrow, sharp incisions surrounded by generally flat topography that slopes away from the ridge over many hundreds of miles.