Nicolaus Copernicus is the Latin version of the famous astronomer’s name which he chose later in his life. The original form of his name is Mikolaj Kopernik. 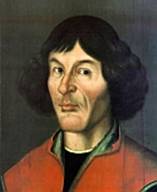 Nicolaus Copernicus
He was a polish astronomer and mathematician born on 19. February 1473 in Torun, Poland.  “His father, also called Nicolaus Copernicus,” had lived in Krakow before moving to Torun where he set up a business trading in copper. He married Barbara Watzenrode, who came from a well off family from Torun, in about 1463. They had four children, two sons and two daughters; Nicolaus was the youngest child in the family. When astronomer was ten years old his father died, and Uncle Lucas Watzenrode, who was a canon at Frauenburg Cathedral became guardian of Barbara and her kids.
“Nicolaus and his brother Andreas” remained in Torun, continuing their primary school education there. In 1488 Copernicus was sent by his uncle to the cathedral school of Wloclawek where he received a good standard humanist education. After 3 years of study in a Wloclawek he and Andreas, went to the University of Krakow. During this time their uncle “Lucas Watzenrode became a Bishop” of Ermland and he planned a church career for both of his nephews. On the University he studied Latin, mathematics, astronomy, geography and philosophy. Copernicus learnt his astronomy from “Tractatus de Sphaera by Johannes de Sacrobosco written in 1220”. The astronomy courses that Nicolaus studied were in a modern language, they were more mathematics courses which were saying about Aristotle and Ptolemy’s view of the universe. Because of that students understood calendar, could calculate the dates of holy days and some of them were able to navigate at sea.
After four years of study at Krakow he returned to Torun. His uncle still wanted him to make a career in a church. Therefore Copernicus decided to go to the “University of Bologna” to increase his knowledge in canon law. During his three-year stay at Bologna, between autumn 1496 and spring 1501, Copernicus seems to have devoted himself less keenly to studying canon law. He received his doctorate in law only after seven years, following a second return to Italy in 1503, than to studying the humanities-probably attending lectures by Filippo Beroaldo, Antonio Urceo, called Codro, Giovanni Garzoni and Alessandro Achillini-and to studying astronomy.

During that time Nicolaus met the famous astronomer Domenico Maria Novara da Ferrara and became his student and assistant. Copernicus was developing new ideas inspired by reading the “Epitome of the Almagest” wrote in 1496 by George von Peuerbach and Johannes Regiomontanus. He confirmed its observations about some details in Ptolemy’s theory of the Moon’s motion, by conducting at Bologna a memorable observation of “Aldebaran – the brightest star in the Taurus constellation”, whose results reinforced his doubts as to the geocentric system.
“In 1500 Copernicus visited Rome”, and he stayed there for a year lecturing to scholars on mathematics and astronomy. While in Rome he observed an eclipse of the Moon which took place in November 1500.
He returned to Frauenburg (also known as “Frombork”) in the spring of 1501 and was officially installed as a canon of the Ermland Chapter on 27 July. He had not completed his degree in canon law at Bologna so he requested his uncle that he be allowed to return to Italy both to take a law degree and to study medicine. Copernicus was granted leave on 27 July 1501. As this quotation indicates, the Cathedral Chapter liked his proposal to study medicine and provided the necessary funds. He set off again for Italy, this time going to Padua. Copernicus had another reason to return to Italy, which he almost certainly did not disclose, and that was to continue his studies of astronomy. “Padua was famous for its medical school” and while he was there Copernicus studied both medicine and astronomy. At that time astronomy was essentially astrology and, as such, considered relevant to medicine since physicians made use of astrology. In the spring of 1503 he decided formally to obtain his doctorate in Canon Law, but he did not return to Bologna but rather took the degree at the University of Ferrara. “After receiving his doctorate, Copernicus stayed in Ferrara for a few months before returning to Padua to continue his studies of medicine”. There is no record that he ever graduated from Padua.
In 1509 Copernicus published a work, which was properly printed, giving Latin translations of Greek poetry by the obscure poet Theophylactus Simocattes. While accompanying his uncle on a visit to Kraków, he gave a manuscript of the poetry book to a publisher friend there.
Lucas Watzenrode died in 1512 and following this Copernicus resumed his duties as canon in the Ermland Chapter at Frauenburg. He now had more time than before to devote to his study of astronomy, having an observatory in the rooms in which he lived in one of the towers in the town’s fortifications.
Around 1514 he distributed a little book, not printed but hand written, to a few of his friends who knew that he was the author even though no author is named on the title page. This book, usually called the “Little Commentary”, set out Copernicus’s theory of a universe with the sun at its centre. It is likely that he wrote the Little Commentary in 1514 and began writing his major work De revolutionibus in the following year.
Given Copernicus’s nature it is clear that he would have liked to have lived a quiet life at Frauenburg, carrying out his (relatively few) duties conscientiously and devoting all his spare time to observing, developing his theories of the universe, and writing De Revolutionibus. It is equally clear that his fame as an astronomer was well known for when the Fifth Lateran Council decided to improve the calendar, which was known to be out of phase with the seasons, the Pope appealed to experts for advice in 1514, one of these experts was Copernicus. Many experts went to Rome to advise the Council, but Copernicus chose to respond by letter. He did not wish to contribute more to the discussions on the calendar since he felt that the motions of the heavenly bodies were still not understood with sufficient precision. 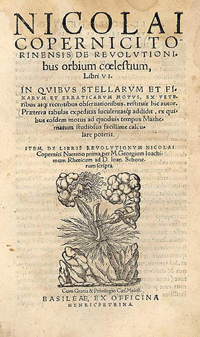 The front page of “De Revolutionibus”

“De Revolutionibus (On the Revolutions of the Heavenly Spheres)”.  famously proposed the heliocentric theory: the proposition that the Earth rotates around the Sun rather than in opposite way. During Copernicus’ lifetime, orthodox opinion asserted the contrary view – that the Earth was fixed, unmoving at the centre of the Universe. This “geo-centric” myth was not easy to disprove: it was popularly held to be true by common sense perception supported by two millennia of philosophical tradition, not to mention Biblical scripture. Copernicus’ work on
De Revolutionibus seems to have begun in about 1514; however, he was to work quietly on the manuscript for the rest of His life – only publishing it on his death bed after persuasion from his friend and pupil, the young mathematician Joachim Rheticus. Rheticus’ role in the publication of the work has been acknowledged as paramount – without his encouragement and willingness to act as a middle man between the author and the Nuremburg printer, Johannes Petreius, the work may never have been published. On the Revolutions of the Heavenly Spheres is divided into six sections, or “books”. The first of these books sets out Copernicus’
heliocentric theory as the basis for his cosmology and ongoing
calculations; the second book uses trigonometry to solve various motions of heavenly bodies in the sky; book three looks at the motion of the Earth; book four, the motion of the Moon; and books five and six, the motions of the planets. After the initial cosmological chapters, Copernicus’ work becomes increasingly complex and mathematical as he attempts to show how his heliocentric cosmology permits astronomers to posit alternative methods from Ptolemy’s to account for the motion of heavenly bodies. A very firm grasp of mathematics would have been required for a reader to follow all of his calculations and reasoning.
Despite the book was written in Latin, with a dedication for pope Pius III, Copernicus was still afraid of reaction of a Catholic Church, any way he was right the book has been putted on the list of forbidden books by church. Only in the XIX century it became possible to reconcile the science theories with religion ones.
Nicolaus significance in a Renaissance history was huge. In that times people where thinking that the earth is in a centre of universe (Ptolemy’s geocentric theory). Polish astronomer proved that the sun is in the centre of universe (heliocentric theory) it was very important for future astronomers like “Tycho Brahe” or “Galileo Galilei”. They all used books written by Copernicus to study astronomy and to learn more about universe. By analysing his biography I found out that he was an astronomer, mathematician, doctor, strategist, cleric, economist, was writing poems and reading the letters of old philosophers. He was one of the very important people during the renaissance history without his discovers there would not be present astronomy.

Aldebaran – the brightest star in the Taurus constellation at  http://en.wikipedia.org/wiki/Nicolaus_Copernicus