Early morning April 18, 1906, a violent shaking roused San Francisco’s population from their beds. The 40–second tremor moved furniture, shattered glass, and toppled chimneys. The shaking paused for 10 seconds, renewing with another stronger tremor for 25 more seconds. Then it was over. Pandemonium ensued: streets filled with stunned residents, cries rang out from injured and trapped victims, and many believed the end of the world had come.
The earthquake was estimated at between 7.8 and 8.3 magnitude, resulted from the North American and Pacific tectonic plates moving past each other by more than 15 feet (annual average is two inches). 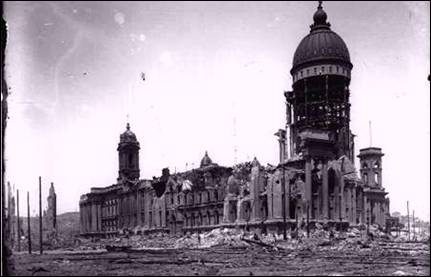 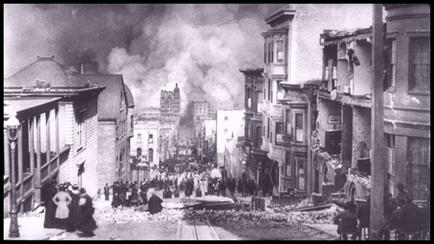 Sacramento Street and the approaching fire.