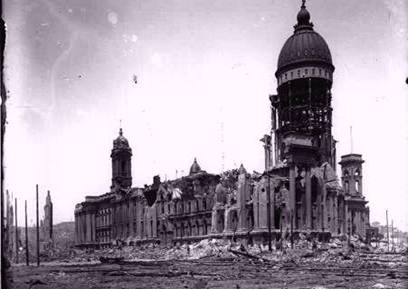 The main shock began on the San Andreas Fault off the coast near San Francisco at 5:12 in the morning of 18 April 1906.Many years later, researchers assigned in a magnitude of 7.8 or so.

Violent shaking went on for some 60 seconds. The rapture extended for to the north and south, 430 kilometres in all. Parts of the fault were off set by as much 6 meters. By day’s end and dozen of after shocks later, much of San Francisco was a shambles and large fires had broken out treating the rest. The fires burned for three more days as water supplies, damage by ground movement were reduced to a trickle. Even now, true San Francisco call the debacle of 1906 the Great Earthquake and Fire, but in fact fires are part and parcel of any large earthquake.