(Irish: Boireann, meaning “great rock”, Boirinn, the dative form, is the modern form used by the Ordnance Survey) is a karst-landscape region or alvar in northwest County Clare, in Ireland. It is one of the largest karst landscapes in Europe. The region measures approximately 250 square kilometres and is enclosed roughly within the circle made by the villages Ballyvaughan, Kinvara, Tubber, Corofin, Kilfenora and Lisdoonvarna. It is bounded by the Atlantic and Galway Bay on the west and north, respectively.
A small portion of the Burren has been designated as Burren National Park. It is one of only six National Parks in the Republic of Ireland and the smallest in size (15 km²).
The definite article (making it “the Burren”) has only been added to the name in the last few decades, possibly by academics, as it had always been called Boireann in Irish and Burren in English. 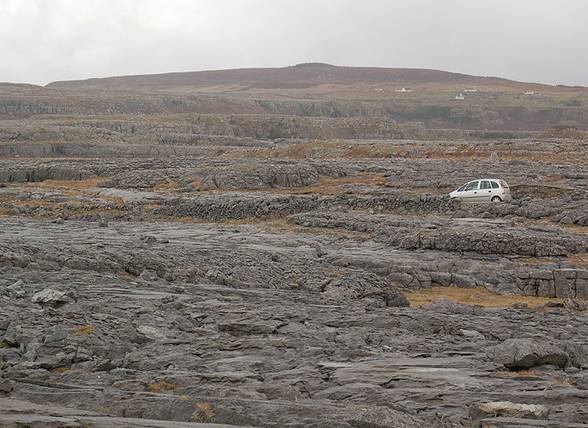 The Burren area formed part of the territory of Corco Modhruadh, meaning “seed or people of Modhruadh” which was coextensive with the diocese of Kilfenora. At some point around the 12th Century, the territory was divided in two: Corco Modhruadh Iartharach (“Western Corcomroe”) and Corco Modhruadh Oirthearach (“Eastern Corcomroe”) also known as Boireann which in the late 16th century became the English administrative baronies of Corcomroe and Burren respectively. The O’Loughlin (Ó Lochlainn) clan ruled Boireann down to the mid 17th century from their chief residence at Gragans Castle (towerhouse not the house of the same name). The chief of the family was known in later times as the ‘Prince of Burren’ and clan members were buried in the family tomb near the altar of Corcomroe Abbey. Their kinsmen the O’Connor (Ó Conchubhair) clan ruled Corco Modhruadh Oirthearach from Dough Castle near Liscannor. The villages and towns found within the medieval territory of Boireann include Lisdoonvarna, Ballyvaughan, New Quay / Burrin, Noughaval, Bealaclugga, Carron and Fanore / Craggagh.
Burren is rich with historical and archaeological sites. There are more than 90 megalithic tombs in the area, portal dolmens (including Poulnabrone dolmen), a celtic high cross in the village of Kilfenora, and a number of ring forts – among them the triple ring fort Cahercommaun on the edge of an inland cliff, and the exceptionally well-preserved Caherconnell Stone Fort. Corcomroe Abbey is one of the area’s main scenic attractions.

During counter-guerilla operations in Burren in 1651-52, Edmund Ludlow stated, “(Burren) is a country where there is not enough water to drown a man, wood enough to hang one, nor earth enough to bury him…… and yet their cattle are very fat; for the grass growing in turfs of earth, of two or three foot square, that lie between the rocks, which are of limestone, is very sweet and nourishing.”
The rolling hills of Burren are composed of limestone pavements with crisscrossing cracks known as “grikes”, leaving isolated rocks called “clints”. The region supports arctic, Mediterranean and alpine plants side-by-side, due to the unusual environment. The blue flower of the Spring Gentian, an alpine plant, is used as a symbol for the area by the tourist board. Burren’s many limestone cliffs, particularly the sea-cliffs at Ailladie, are popular with rock-climbers. For cavers, there are a number of charted caves in the area, notably Pollnagollum. Doolin is a popular “base camp” for cavers, and is home to one of the two main cave-rescue stores of the Irish Cave Rescue Organisation. 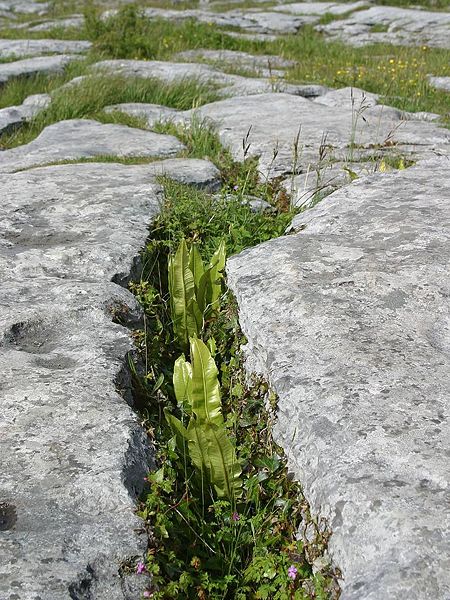 Grikes and clints run along the limestone pavement.