On October 9, 1940 at Oxford Street maternity Hospital, in Liverpool England, John Winston Lennon was born to Julia and Freddie Lennon. For his early life, Lennon lived with his Aunt Mimi and her husband George Smith. Julia taught him how to play the banjo. 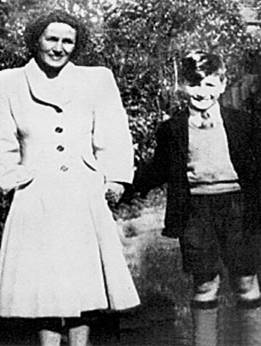 John Lennon as a child with his aunt Mimi, who raised him.

Lennon attended Dovedale Primary School. From 1952 to 195 and later he attended the Quarry Bank High School in Liverpool, where he was known as a “happy-go-lucky”

Julia bought Lennon his first guitar in 1957, She insisted it be delivered to her house and not to Mimi’s, who hoped that Lennon would grow bored with music; she was skeptical of Lennon’s claim that he would be famous one day, often telling him, “The guitar’s all very well, John, but you’ll never make a living out of it”. 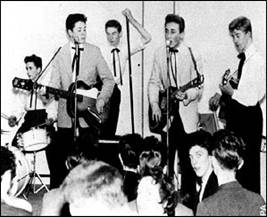 Lennon started The Quarrymen in March 1957. On 6 July 1957, Lennon met Paul McCarthy at the Quarrymen’s second concert. They then, began writing songs together. The first song Lennon completed was “Hello, Little Girl”.

After some name changes, they decided on The Beatles. Lennon was considered the leader of the group. McCartney explained: “I definitely looked up to John. He was older and he was very much the leader”

On 9 May 1962, George Martin signed The Beatles to EMI’s comedy label Parlophone. The Beatles released their first single, “Love Me Do” .On 5 October; it reached number 17 on the British charts. On 11 February 1963, the group recorded their first album Please Please Me.

The album and single hit number 1 in Britain, and EMI offered the album to their US subsidiary, Capitol Records, but they turned it down. Epstein finally secured a deal with Vee-Jay Records; an R&B label. Neither the single nor the album, Introducing… The Beatles was successful in the US. By the time the group recorded “She Loves You”, they were dropped from Vee Jay and once again, Capitol declined to release their records. It did eventually hit number 1 in January 1964, after Capitol Records finally released “I Want to Hold Your Hand” in America following their historic appearances on The Ed Sullivan Show. 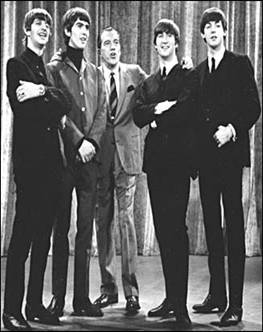 The Beatles on the Ed sullivan show.

The Beatles would embark on a two-year non-stop period of productivity: constant international tours, making movies, and writing hit songs. On 4 March 1966, when Lennon was interviewed for the London Evening Standard by Maureen Cleave, and talked about Christianity by saying: “Christianity will go. It will vanish and shrink. “. The American Bible Belt protested, and conservative groups staged public burnings of Beatles’ records and memorabilia. Radio stations banned Beatles music and concert venues cancelled performances.
The Vatican accepted his apology, but the Beatles soon decided to stop touring, and never performed a scheduled concert again. Lennon later wrote, “I always remember to thank Jesus for the end of my touring days; God bless America. Thank you, Jesus”.

Lennon left The Beatles in September 1969 but agreed not to make an announcement while the band renegotiated their recording contract. He became irate when McCartney issued a self question-and-answer interview in April 1970, declaring that he was no longer a member of The Beatles. Lennon’s reaction when told was “Jesus Christ! He gets all the credit for it!” Lennon later told Rolling Stone: “I was a fool not to do what Paul did, which was used it to sell a record,” and later wrote, “I started the band, I disbanded it. It’s as simple as that”

Yoko Ono and John Lennon were married on March 20, 1969 in Gibraltar. On 31 August 1971, Lennon left England for New York and moved to New York City in September 1971. In late April of 1973, John and Yoko moved into the Dakota apartment building on the upper west side of New York. 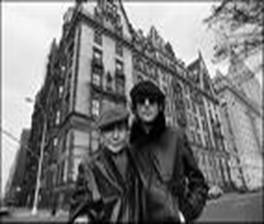 John and Yoko outside the Dakota

In 1977, Lennon announced “we have basically decided, without any great decision, to be with our baby as much as we can until we feel we can take time off to indulge ourselves in creating things outside of the family.” By 1980 however Lennon had began to record again. On September 25, 1980, Yoko met with Sean’s bodyguard, Doug McDougall, to discuss an increase in security around the Dakota, due to John and Yoko’s frequent leaves to the studio. However, they decided to put off solving the problem and scheduled another meeting for October 9, 1980.

What Lennon didn’t know was that this was a serious mistake as he had been targeted by a mentally ill man who was obsessed with Lennon, Mark Chapman, who was born in Fort Worth, Texas worked successfully for the YMCA in Arkansas.

In Honolulu, Chapman checked out “John Lennon: One Day at a Time” from a public library, and became convinced that Lennon was a hypocrite. He became frustrated and decided that the solution to his mental instability would be to kill John Lennon. On October 29, he flew to New York from Honolulu carrying a pistol, but no ammunition. He immediately visited the Dakota building and returned there for five days straight. On November 11, he called his wife in Honolulu and admitted that he had been planning to murder John Lennon. She convinced him to fly home. He returned to Hawaii, telling his wife he had been obsessed with killing Lennon but had snapped out of it. He made an appointment to see a clinical psychologist but instead, on December 6, flew back to New York. There he offered cocaine to a taxi driver and it is reported to have re-enacted scenes from The Catcher in the Rye. His parallel obsession was with Holden Caulfield, the main character of J.D Salinger’s Catcher in the Rye.

On the morning of 8 December 1980, Lennon did a photo shoot for Rolling Stone. After the shoot Lennon gave his last ever interview to DJ Dave Sholin. At 5:00 p.m., Lennon and Ono left their apartment to mix the track “Walking on Thin Ice” at Record Plant Studio

As he left he was approached by several fans seeking autographs, among them Chapman, he silently handed Lennon a copy of Double Fantasy, and Lennon signed an autograph. After signing the album, John asked if that was all he wanted, Chapman replied, “Yes thanks John”. 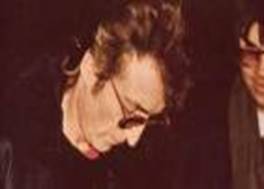 John Lennon and Mark Chapman outside the Dakota

Chapman later reported in a statement that part of him won and he wanted to go back to his hotel but he couldn’t. He waited until Lennon came back. He also stated “He knew where the ducks went in the winter and I needed to know this” (a reference to The Catcher in the Rye) Photographer Paul Goresh snapped a photo of the event.

The Lennon’s spent several hours at the studio before returning to the Dakota .Lennon decided against eating out so he could be home in time to say goodnight to son Sean before he went to sleep. Yoko said; the last thing he had on his mind, she remembers was getting back and seeing Sean before he went to sleep. They got out of their limousine on 72nd Street, even though the car could have been driven into the more secure courtyard

The Dakota’s doorman, Jose Perdomo, and a cab driver saw Chapman standing in the shadows by the archway, Ono walked ahead of Lennon and into the reception area. As Lennon passed by, Chapman fired five bullets at Lennon. One shot missed, but two shots struck Lennon in the left side of his back and two more penetrated his left shoulder. All four bullets inflicted severe gunshot wounds, with at least one of them piercing Lennon’s aorta. Lennon staggered up five steps to the reception area, said, “I’m shot,” and collapsed.

Concierge Jay Hastings gently removed his glasses and covered him with his porter’s jacket, he then called the police. Outside, doorman Perdomo shook the gun out of Chapman’s hand then kicked it across the sidewalk. Chapman then removed his coat and hat, and sat down on the sidewalk. Doorman Perdomo shouted at Chapman, “Do you know what you’ve done?” to which Chapman calmly replied, “Yes, I just shot John Lennon.”

At approximately 10:52 pm, police officer Stephen Spiro arrived at 72nd Archway entrance to the Dakota where he found John Lennon gravely wounded, and a young man sitting a few feet away reading the J.D Salinger’s novel Catcher in the Rye sitting “very calmly” on the sidewalk. He reported that Chapman had scribbled a message on the book’s inside front cover of J.D. Salinger’s The Catcher in the Rye: “To Holden Caulfield. From Holden Caulfield. 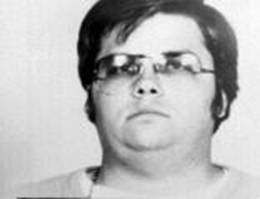 This is my statement.” Chapman was arrested. In his statement to the police three hours later he stated, “I’m sure the large part of me is Holden Caulfield, who is the main person in the book. The small part of me must be the devil” He would later claim that his life mirrored that of Holden Caulfield.

The second team, Officers Bill Gamble and James Moran, arrived a few minutes later. They immediately carried Lennon into their squad car and rushed him to Roosevelt Hospital. Officer Moran said they placed Lennon on the back seat. Moran asked, “Do you know who you are?” Lennon nodded slightly and tried to speak, but could only manage to make a gurgling sound, and lost consciousness

Lennon was pronounced dead on arrival at the Roosevelt Hospital at 11:21 p.m. by Dr. Stephan Lynn. Ono, crying “tell me it’s not true,” was taken to Roosevelt Hospital and led away in shock after she learned that her husband was dead. The following day, Ono issued a statement: “There is no funeral for John. John loved and prayed for the human race. Please do the same for him. Love Yoko and Sean.” Lennon was cremated on 10 December 1980, at the Ferncliff Cemetery in Hartsdale, New York, and his ashes were given to Ono. On 14 December 1980, millions of people around the world held a ten minute silence to remember Lennon.

Chapman pleaded guilty and was charged with second degree murder. He was taken to Bellevue hospital for psychiatric examination and sentenced to 20 years to life, in which Chapman stated “I would listen to this music and I would get angry at him. For sayings that he didn’t believe in god…and that he didn’t believe in the Beatles….” Chapman has been imprisoned since 1981 in Attica Correctional Facility, outside of Buffalo, New York.

The death of John Lennon for many people marks the end of optimism of the 1960’s.