The path to this invasion began with the rise of Adolf Hitler. Hitler came to power in Germany in 1933. From that point onward, The Nazi government increased the strength of the German armed forces and sought to overturn the Versailles Treaty, to recover German territory lost at the peace settlement, and to return to the so-called Fatherland. German-speaking minorities within the borders of surrounding countries. Hitler stated goal was to secure “living space” for the German “master race.” The invasion began on 1 September 1939, one week after the signing of the Molotov–Ribbentrop Pact, and ended 6 October 1939 with Germany and the Soviet Union dividing and annexing the whole of Poland. 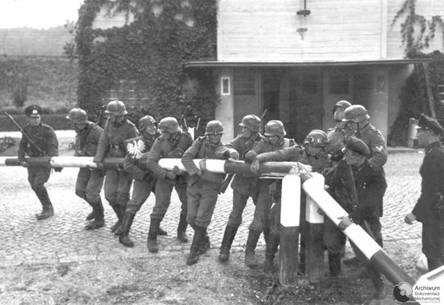 In 1933, the National-Socialist German Workers’ Party, under their leader Adolf Hitler, came to power in Germany. Germany sought to gain hegemony in Europe, and to take over Soviet Union territory, acquiring “Living Space” and expanding “Greater Germany” to be eventually surrounded by a ring of allied states, satellite or puppet states. As part of this long term policy, at first, Hitler pursued a policy of rapprochement with Poland, trying to improve German–Polish relations, culminating in the German–Polish Non-Aggression Pact of 1934. Earlier, Hitler’s foreign policy worked to weaken the ties between Poland and France, and to manoeuvre Poland into the Anti-Comintern Pact, forming a cooperative front against the Soviet Union. Poland would be granted territory of its own, to its northeast, but the concessions the Poles were expected to make meant that their homeland would become largely dependent on Germany, functioning as little more than a client state and Polish independence would eventually be threatened altogether. In addition to Soviet territory, the National-Socialists were also interested in establishing a new border with Poland because the German exclave of East Prussia was separated from the rest of the Reich by the “Polish Corridor”. The Corridor constituted land long disputed by Poland and Germany, and inhabited by both groups. Taken by Prussia in the Partitions of Poland in 1772, the corridor was later recovered by Poland after the Treaty of Versailles. Many Germans also wanted to incorporate into Germany the Free City of Danzig (Gdansk), an important port city with a predominantly German population, also gained by Germany in the 18th century, and that was split off Germany after Versailles into a nominally independent entity. Hitler sought to reverse those territorial losses, and on many occasions made an appeal to German nationalism, promising to “liberate” the German minority still in the Corridor, as well as Danzig.

Following several German-staged incidents, which German propaganda used as an excuse to claim that German forces were acting in self-defence, the first act of war took place on 1 September 1939, at 04:40, when the German Air Force attacked the Polish town of Wielun, destroying 75% of the city and killing close to 1,200 people, most of them civilians. This invasion began the Second World War. Five minutes later, the old German battleship Schleswig-Holstein opened fire on the Polish military transit depot at Westerplatte in the Danzig on the Baltic Sea. At 08:00, German troops, still without a formal declaration of war issued, attacked the Polish town of Mokra. The Battle of the Border had begun. Later that day, the Germans attacked on Poland’s western, southern and northern borders, while German aircraft began raids on Polish cities. The main line of attack led eastwards from Germany proper through the western Polish border. Supporting attacks came from East Prussia in the north, and a co-operative German-Slovak tertiary attack by units from German-allied Slovakia in the south. All three headed towards assaults converged on the Polish capital of Warsaw.
The Allied governments declared war on Germany on 3 September; however, they failed to provide any meaningful support. The German-French border saw only a few minor battles, although the majority of German forces, including eighty-five percent of their armoured forces, were engaged in Poland. Despite some Polish successes in minor border battles, German technical, operational and numerical superiority forced the Polish armies to retreat from the borders towards Warsaw and Lwów. The Luftwaffe gained air speriority early in the campaign. By destroying communications, the Luftwaffe increased the speed of the advance which overran Polish airstrips and early warning sites and causing logistical problems for the Poles. Many Polish Air Force units ran low on supplies, 98 of their number withdrew into then-neutral Romania. The Polish initial strength of 400 was reduced to just 54 by 14 September and air opposition virtually stopped. 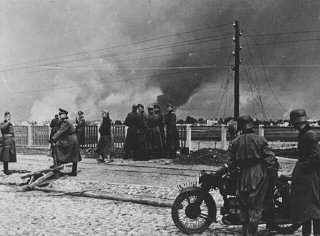 By 3 September when Günther von Kluge in the north had reached the Vistula some 10 kilometres from the German border at that time river and Georg von Küchler was approaching the Narew River. Walther von Reichenau’s armour was already beyond the Warta river. Two days later, his left wing was well to the rear of Lódz and his right wing at the town of Kielce. By 8 September one of his armoured corps was on the outskirts of Warsaw, having advanced 225 kilometres (140 miles) in the first week of war. Light divisions on Reichenau’s right were on the Vistula between Warsaw and the town of Sandomierz by 9 September while List, in the south, was on the river San above and below the town of Przemysl. At the same time, Guderian led his 3rd Army tanks across the Narew, attacking the line of the Bug River, already encircling Warsaw. All the German armies made progress in fulfilling their parts of the Fall Weiss plan. The Polish armies were splitting up into uncoordinated fragments, some of which were retreating while others were launching disjointed attacks on the nearest German columns.
Polish forces abandoned the regions of Pomerelia (the Polish Corridor), Greater Poland and Polish Upper Silesia in the first week. The Polish plan for border defence was proven a dismal failure. The German advance as a whole was not slowed. On 10 September the Polish commander-in-chief, Marshal Edward Rydz-Smigly, ordered a general retreat to the southeast, towards the so-called Romanian Bridgehead. Meanwhile, the Germans were tightening their encirclement of the Polish forces west of the Vistula (in the Lódz area and, still farther west, around Poznan) and also penetrating deeply into eastern Poland. Warsaw, under heavy aerial bombardment since the first hours of the war, was attacked on 9 September and was put under siege on 13 September. Around that time, advanced German forces also reached the city of Lwów, a major metropolis in eastern Poland. 1,150 German aircraft bombed Warsaw on 24 September. 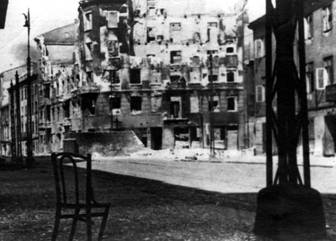 The largest battle during this campaign, the Battle of Bzura, took place near the Bzura river west of Warsaw and lasted from 9 September to 19 September. Polish armies Poznan and Pomorze, retreating from the border area of the Polish Corridor, attacked the advancing German 8th Army, but the counterattack failed after initial success. After the defeat, Poland lost its ability to take the initiative and counterattack on a large scale. German air power was instrumental during the battle. The Luftwaffe’s offensive broke what remained of
Polish resistance in an “awesome demonstration of air power”. The Luftwaffe quickly destroyed the bridges across the Bzura River. Afterward, the Polish forces were trapped out in the open, and were attacked by wave after wave of Stukas, which caused huge numbers of casualties. The Polish anti aircraft guns positions ran out of ammunition and retreated to the forests, but were then bombed from the air. The Luftwaffe left the army with the easy task of mopping up survivors. The Stukageschwaders alone dropped 388 tonnes of bombs during this battle.
The Polish government (of President Ignacy Moscicki) and the high command (of Marshal Edward Rydz-Smigly) left Warsaw in the first days of the campaign and headed southeast, reaching Lublin on 6 September. From there it moved on 9 September to Kremenez, and on 13 September to Zaleshiki on the Romanian border. Rydz-Smigly ordered the Polish forces to retreat in the same direction, behind the Vistula and San rivers, beginning the preparations for the long defence of the Romanian Bridgehead area.
Poland participated in the partition of Czechoslovakia that followed the Munich Agreement, although they were not part of the agreement. It coerced Czechoslovakia to surrender the city of Ceský Tešín by issuing an ultimatum to that effect on 30 September 1938, which was accepted by Czechoslovakia on 1 October. In 1938, Germany began to increase its demands for Danzig, while proposing that a roadway be built in order to connect East Prussia with Germany proper, running through the Polish Corridor. Poland rejected this proposal, fearing that after accepting these demands, it would become increasingly subject to the will of Germany and eventually lose its independence as the Czechs had. The Poles also distrusted Hitler and his intentions. At the same time, Germany’s collaboration with anti-Polish Ukrainian nationalists from the Organization of Ukrainian Nationalists, which was seen as an effort to isolate and weaken Poland, further weakened German credibility in Polish eyes. The British were also aware of this. On 31 March, Poland was backed by a guarantee from Britain and France, though neither country was willing to pledge military support in Poland’s defence. British Prime Minister Neville Chamberlain and his Foreign Secretary, Lord Halifax, still hoped to strike a deal with Hitler regarding Danzig (and possibly the Polish Corridor), and Hitler hoped for the same. Chamberlain and his supporters believed war could be avoided and hoped Germany would agree to leave the rest of Poland alone. German hegemony over Central Europe was also at stake.
The city of Warsaw, capital of Poland, flanks both banks of the Vistula River. A city of 1.3 million inhabitants, Warsaw was the capital of the resurrected Polish state in 1919. Before World War II, the city was a major center of Jewish life and culture in Poland. Warsaw’s prewar Jewish population of more than 350,000 constituted about 30 percent of the city’s total population. The Warsaw Jewish community was the largest in both Poland and Europe, and was the second largest in the world, second only to New York City. Following the German invasion of Poland on September 1, 1939, Warsaw suffered heavy air attacks and artillery bombardment. German troops entered Warsaw on September 29, shortly after its surrender. Less than a week later, German officials ordered the establishment of a Jewish council (Judenrat) under the leadership of a Jewish engineer named Adam Czerniaków. As chairman of the Jewish council, Czerniaków had to administer the soon-to-be established ghetto and to implement German orders. On November 23, 1939, German civilian occupation authorities required Warsaw’s Jews to identify themselves by wearing white armbands with a blue Star of David. The German authorities closed Jewish schools, confiscated Jewish-owned property, and conscripted Jewish men into forced labor and dissolved prewar Jewish organizations.
On October 12, 1940, the Germans decreed the establishment of a ghetto in Warsaw. The decree required all Jewish residents of Warsaw to move into a designated area, which German authorities sealed off from the rest of the city in November 1940. The ghetto was enclosed by a wall that was over 10 feet high, topped with barbed wire, and closely guarded to prevent movement between the ghetto and the rest of Warsaw. The population of the ghetto, increased by Jews compelled to move in from nearby towns, was estimated to be over 400,000 Jews. German authorities forced ghetto residents to live in an area of 1.3 square miles, with an average of 7.2 persons per room. 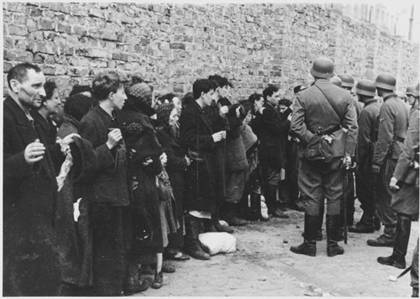