Elvis Presley was born on January 8, 1935, in Tupelo, Mississippi. His parents were Vernon Elvis and Gladys Presley. He was born in a two-room  house built by his father in readiness for the birth, Jesse Garon Presley, his identical twin brother, was delivered 35 minutes before him, but was born stillborn. As an only child, Presley became close to both parents and formed an unusually tight bond with his mother. The family attended an Assembly of God church where he found his initial musical inspiration. 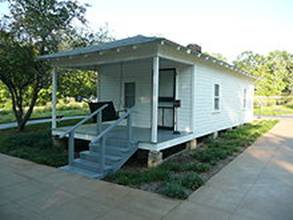 In September 1941, Elvis began school at East Tupelo Consolidated, where his teachers regarded him as average. He was encouraged to enter a singing contest after impressing his schoolteacher with a version of Red Foley’s country song “Old Shep” during morning prayers. The contest, held at the Mississippi-Alabama Fair and Dairy Show on October 3, 1945, saw his first public performance. Dressed as a cowboy, the ten-year-old Presley stood on a chair to reach the microphone and sang “Old Shep”. He remembered getting fifth in the competition. A few months later, for his birthday, Presley received his first guitar. He had wanted a considerably more expensive bicycle. Over the following year, he got basic guitar lessons from two of his uncles and the new pastor at the family’s church. Presley remembered and said , “I took the guitar, and I watched people, and I learned to play a little bit. But I would never sing in public. I was very shy about it”.

In November 1948, the family moved to Memphis, Tennessee. After living for nearly a year in rented houses, they ended up in a two-bedroom apartment in the public housing complex known as the Courts. Elvis enrolled at Humes high school  where he  received a C in music in eighth grade.His music teacher told him he had no aptitude for singing.He brought in his guitar the next day in an effort to prove otherwise.He was generally too shy to perform openly, and was occasionally bullied by classmates for playing and singing . 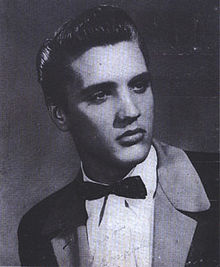 In 1950, he began practicing guitar regularly with Jesse Lee Denson, a close neighbor. That September, he began working  at Loew’s cinema, but his mother made him leave as she feared it was affecting his school work.During his junior year, Presley began to stand out more among his classmates, largely because of his appearance: he grew out his sideburns and styled his hair with rose oil and Vaseline. On his own time, he would head down to Beale Street, the heart of Memphis’s thriving blues scene, and gaze longingly at the wild, flashy clothes in the windows of Lansky Brothers. By his senior year, he was wearing them. Elvis Presley, who never received formal music training or learned to read music, studied and played by ear. He frequented record at stores with jukeboxes and listening booths. Singings downtown, where many of the white gospel groups that performed reflected the influence of African American spiritual music.

1953, Presley already seemed to have singled out music as his future.
In August 1953, Presley walked into the offices of Sun Records. He aimed to pay for a few minutes of studio time to record a two-sided acetate disc: “My Happiness” and “That’s When Your Heartaches Begin”. He would later claim he intended the record as a gift for his mother, or was very interested in what he sounded like, though there was a much cheaper, amateur record-making service at a nearby general store. Biographer Peter Guralnick argues that he chose Sun with the hope of being discovered. Asked by receptionist Marion Keisker what kind of singer he was, Presley responded, “I sing all kinds.” When she pressed him on whom he sounded like, he repeatedly answered, “I don’t sound like nobody.” After he recorded, Sun boss Sam Phillips asked Keisker to note down the young man’s name, which she did along with her own commentary: “Good ballad singer. Hold.” Presley cut a second acetate in January 1954—”I’ll Never Stand In Your Way” and “It Wouldn’t Be The Same Without You”—but again nothing came of it.
Not long after, he failed an audition for a local vocal quartet, the Songfellows. He explained to his father, “They told me I couldn’t sing.” Songfellow Jim Hamill later claimed that he was turned down because he did not demonstrate an ear for harmony at the time. In April, Presley began working for the Crown Electric company as a truck driver. His friend Ronnie Smith, after playing a few local gigs with him, suggested he contact Eddie Bond, leader of Smith’s professional band, which had an opening for a vocalist. Bond rejected him after a tryout, advising Presley to stick to truck driving “because you’re never going to make it as a singer.

By 1973 all of this was gone and Elvis was in the middle of a divorce following a marriage breakdown.. He was now becoming increasingly unwell. Twice during the year he overdosed on barbiturates, spending three days in a coma in his hotel suite after the first incident. Toward the end of 1973, he was hospitalized, semicomatose from the effects of Demerol addiction. According to his main physician, Dr. George C. Nichopoulos, Presley “felt that by getting drugs from a doctor, he wasn’t the common everyday junkie getting something off the street.” Since his comeback, he had staged more live shows with each passing year, and 1973 saw 168 concerts, his busiest schedule ever. Despite his failing health, in 1974 he undertook another intensive touring schedule. 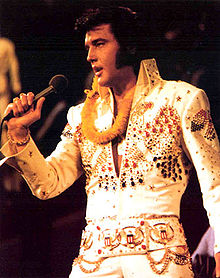 On July 13, 1976, Vernon Presley—who had become deeply involved in his son’s financial affairs—fired “Memphis Mafia” bodyguards Red West (Presley’s friend since the 1950s), Sonny West, and David Hebler, citing the need to “cut back on expenses”. Presley was in Palm Springs at the time, and some suggest the singer was too cowardly to face the three himself. Another associate of Presley’s, John O’Grady, argued that the bodyguards were dropped because their rough treatment of fans had prompted too many lawsuits. However, Presley’s stepbrother David Stanley has claimed that the bodyguards were fired because they were becoming more outspoken about Presley’s drug dependency. Presley and Linda Thompson split in November, and he took up with a new girlfriend, Ginger Alden. He proposed to Alden and gave her an engagement ring two months later, though several of his friends later claimed that he had no serious intention of marrying again,which was true because,the following august was dead.What had happened was that Elvis was scheduled to fly out of Memphis on the evening of August 16, 1977, to begin another tour. That afternoon, Alden discovered him unresponsive on his bathroom floor. Attempts to revive him failed, and death was officially pronounced at 3:30 pm at Baptist Memorial Hospital. 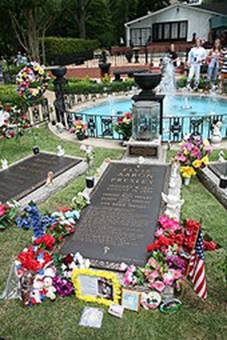