The Mongols were illiterate, religiously shamanistic and perhaps no more than “700,000” in number. Their language today is described as Altaic, a language unrelated to Chinese, derived from inhabitants in the Altay mountain range in western Mongolia – a language unrelated to Chinese. They were herdsmen on the grassy plains north of the Gobi Desert and south of Siberian forests. 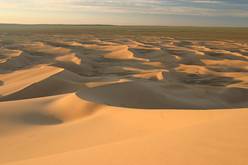 Before the year 1200, the Mongols were fragmented, moving about in small bands headed by a chief, or “khan”, and living in portable felt dwellings, called by the Mongols “ger”. The Mongols endured frequent deprivations and sparse areas for grazing their animals. They frequently fought over turf, and during hard times they occasionally raided, interested in goods rather than bloodshed. They did not collect heads or scalps as trophies and did not notch wood to record their kills.

From his late teens to age thirty-eight in 1200, a Mongol named “Temuchin” rose as khan over various families. He was a good manager, collecting people of talent. “He was vassal to Ong Khan”, titular head of a confederacy better organized than other Mongol clans. Temuchin joined Ong Khan in a military campaign against Tatars to their east, and following the success of this campaign Ong Khan declared Temuchin as his adoptive son and heir. Ong Khan’s natural son, Senggum, had been expecting to succeed his father and plotted to assassinate Temuchin. Temuchin learned of this, and those loyal to Temuchin defeated those loyal to Senggum. Temuchin was now established as the head of what had been Ong Khan’s coalition.

Genghis Khan moved to secure his borders. To his south he made an alliance with the Uighurs, who were closer than the Mongols were to the Silk Road and to wealth. He married his daughter to the Uighur Khan, and the Uighur Khan brought to the wedding party a caravan laden with gold, silver, pearls, brocaded fabrics, silks and satins. The Mongols had only leather, fur and felt — a humiliation for a master of the entire world.
Genghis Khan needed booty to pay troops securing his northern border and subduing an old enemy there, the Merkits. He acted on his mandate as the rightful ruler of the entire world and attacked the rulers of farmers and herders in northwestern China, the Tangut, who had much in goods like the Uighur Khan. In warriors the Mongols were outnumbered two to one, and they had to learn a new kind of warfare against fortified cities, including cutting supply lines and diverting rivers. Genghis Khan and his army were victorious, and in 1210 Genghis Khan won from the Tangut recognition as overlord.

Also in 1210, the Jin dynasty of “Urchin people, who ruled that part of northern China that included Beijing” sent a delegation to Genghis Khan demanding Mongol submission as vassals. The Jin dynasty controlled the flow of goods along the Silk Road, and defying them meant a lack of access to those goods. Genghis Khan and the Mongols discussed the matter and chose war. Genghis, prayed alone on a mountain, bowing down and stating his case to his supernatural guardians, describing the grievances, the tortures and killings those generations of his people had suffered at the hands of the Urchin. And he pleaded that he had not sought war against the Urchins and had not initiated the quarrel.

“In 1211, Genghis Khan and his army attacked.” The Urchin (Jin) dynasty had a large and effective army but they were hard pressed by both the Mongols and by a border war with the Tangut. They were also under attack by Chinese from south of the Yangzi River. But the Urchins drove the Chinese armies into retreat.

The Mongols used divide and conquer tactics, using benevolence toward those who sided with them and terror and bloodshed against those who did not. They ravaged the countryside, gathering information and booty and driving populations in front of them, clogging the roads and trapping the Jurchen within their cities, where the “Urchin (Jin) dynasty was subject to revolts”. The Mongols used conscripted labor in attacking cities and in operating their newly acquired Chinese siege engines.

Against the Urchins the Mongols had an advantage in diet, which included a lot of meat, milk and yogurt, and they could miss a day or two of eating better than Urchin soldiers, who ate grains. Genghis Khan and his army overran Beijing and pushed into the heartland of northern China. Military success helped as people acquired the impression that Genghis Khan had the Mandate of Heaven and that fighting against him was fighting heaven itself. The Urchin emperor recognized Mongol authority and agreed to pay tribute.

After six years of fighting the Urchin, Genghis Khan returned to Mongolia, leaving one of his best generals in charge of Mongol positions. Returning with Genghis Khan and his Mongols were engineers who had become a permanent part of their army, and there were captive musicians, translators, doctors and scribes, camels and wagonloads of goods, and goods from China would now come in a steady flow.
The Mongols were happy to be back from China, their homeland higher in elevation, less humid and cooler. As eaters of meat and sparsely populated they felt superior to people in northern China, but they liked what China had to offer, and at home there was change. The continuing flow of goods from China had to be administered and properly distributed, and buildings had to be built to store the goods. Success in war was changing the Mongols – as it had the Romans and the Arabs.

Genghis Khan wanted trade and goods, including new weapons, for his nation. A Mongol caravan of several hundred merchants approached a recently formed Khwarezmid Empire in Persia and Central Asia. 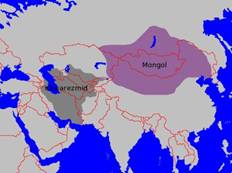 “The sultan there claimed that spies were in the caravan. Genghis Khan sent envoys. The sultan received them by having the chief of the envoys killed and the beards of the others burned”, and he sent the other envoys back to Genghis Khan.

Genghis Khan retaliated, sending his army westward. In the coldest of months the Mongols rode across the desert to Transoxiana with no baggage, slowing to the pace of merchants before appearing as warriors in front of the smaller towns of the sultan’s empire. “His strategy was to frighten the townspeople into surrendering without battle”, benefiting his own troops, whose lives he valued. Those frightened into surrender were spared violence, those who resisted were slaughtered as an example for others, which sent many fleeing and spreading panic from the first towns to the city of Bukhara. “People in Bukhara opened the city’s gates to the Mongols and surrendered. Genghis Khan told them that they, the common people, were not at fault, that high-ranking people among them had committed great sins that inspired God to send him and his army as punishment”. The sultan’s capital city, Samarkand, surrendered. His army surrendered, and he fled.

Genghis Khan and his army pushed more deeply into the sultan’s empire — into Afghanistan and then Persia. It is said that the caliph in Baghdad was hostile toward the sultan and supported Genghis Khan, sending him a regiment of European crusaders who had been his prisoners. Genghis Khan, having no need for infantry, freed them, with those making it to Europe spreading the first news of the Mongol conquests. Genghis Khan had “100,000 to 125,000” horsemen, with Uighur and Turkic allies, engineers and Chinese doctors a total of from 150,000 to 200,000 men. To show their submission, some offered food to the Mongols, and Genghis Khan’s force guaranteed them protection. Some cities surrendered without fighting. In cities the Mongols were forced to conquer, after killing its fighting men, Genghis Khan divided the survivors by profession. He drafted the few who were literate and anyone who could speak various languages. Those who had been the city’s most rich and powerful he wasted no time in killing, remembering that the rulers he had left behind after conquering the “Tangut and Urchin had betrayed him” soon after his army had withdrawn. The Mongols did not torture, mutilate or maim, but their enemies did. Captured Mongols were dragged through streets and killed for sport and to entertain city residents. Nor did the Mongols partake in the gruesome displays of stitching, emasculation, belly cutting and hacking to pieces that European rulers often resorted to elicit fear and discourage potential enemies. The Mongols merely slaughtered, and preferring to do so from a distance. The city of Nishapur revolted against Mongol rule. The husband of Genghis Khan’s daughter was killed, and, it is said, she asked that everyone in the city be put to death, and, according to the story, they were.

While Genghis Khan was consolidating his conquests in Persia and Afghanistan, “a force of 40,000 Mongol horsemen pushed through Azerbaijan and Armenia”. They defeated Georgian crusaders, captured a Genoese trade-fortress in the Crimea and spent the winter along the coast of the Black Sea. As they were headed back home they met 80,000 warriors led by Prince Mstitslav of Kiev. The battle of Kalka River (1223) commenced. Staying out of range of the crude weapons of peasant infantry, and with better bows than opposing archers, they devastated the prince’s standing army. Facing the prince’s cavalry, they faked a retreat, drawing the armoured cavalry forward, taking advantage of the vanity and over-confidence of the mounted aristocrats. Lighter and more mobile, they strung out and tired the pursuers and then attacked, killed and routed them.

In 1225, Genghis Khan returned to Mongolia. He now ruled everything between the Caspian Sea and Beijing. He looked forward to the Mongols benefits of caravan trade and drawing tribute from agricultural peoples in the west and east. Wanting no divisions rising from religion, he declared freedom of religion throughout his empire. Favouring order and tax producing prosperity, he forbade troops and local officials to abuse people. Soon again, Genghis Khan was at war. He believed that the Tangut were not living up to their obligations to his empire. In 1227, around the age of sixty-five while leading the fighting against the Tangut, Genghis Khan, it is said, fell off his horse and died.

In terms of square miles conquered, Genghis Khan had been the greatest conqueror of all time his empire four times larger than the empire of Alexander the Great. The Mongol nation believed that he had been the greatest man of all time and a man sent from heaven. Among the Mongols he was known as the Holy Warrior, and not unlike the Jews, who continued to see hope in a conquering king like David, Mongols were to continue to believe that one day Genghis Khan would rise again and lead his people to new victories.