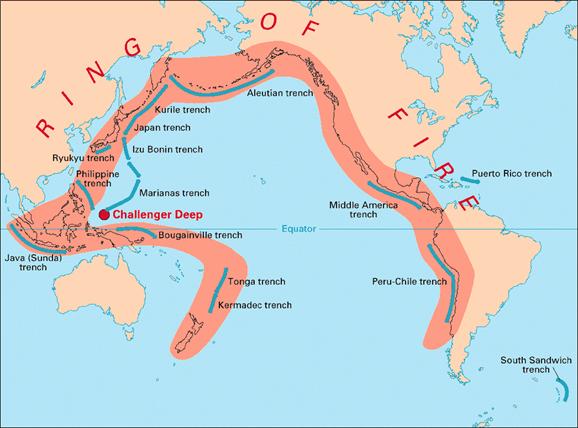 As the Pacific Plate is moving roughly north-west, its conservative margins are found to the south and the east where it is moving away from the eastward-moving Nazca Plate and the Antarctic Plate, which moves approximately south-eastward.

At the northern and western margins, the Pacific Plate comes into direct contact with the Eurasian and Australian Plates. Here, the relatively dense oceanic crust sinks below the continental plates at destructive margins. Conservative margins occur at various stages, linking different sections of constructive and destructive margins. The most notable section is that associated with the San Andreas Fault zone, which runs along the western coast of the USA.

Volcanic Activity along the Pacific Ring of Fire
Two types of volcanic activity occur around the margins of the Pacific plate. At constructive margins, low-level submarine volcanism occurs through volcanic vents on the ocean floor. The volcanic material comes directly from the earth’s mantle and is typically dense, made of a rock called basalt. This creates additional oceanic crust. At destructive margins, the heat and pressure of the subduction process melts the descending rock, which then rises to the surface to supply long chains of volcanoes. These are made from recycled crustal rocks and are typically much more explosive than the volcanic vents found at constructive margins. In the Pacific, these zones generate the volcanic belts of the Aleutian Islands, Kuril Islands Japan, Philippines and the South Pacific/Northern New Zealand.

Earthquakes Along the Pacific Ring of Fire
The Pacific Ring of Fire is not only characterised by the presence of many of the earth’s most active volcanoes: it is also the location for around 80% of the world’s earthquakes. Earthquakes are common along subduction zones: in 2010, the major earthquakes in Christchurch New Zealand, and two large earthquakes in the Aleutian Islands, made the headlines. Smaller swarms of earthquakes also occur along mid-ocean ridges.
Although conservative margins are not characterised by volcanic activity, the immense strains which build up by lateral movement between plate boundaries will, when released, generate earthquakes. It was a rupture of the conservative margin which forms the western edge of the Ring of Fire, the San Andreas Fault zone, which caused the destructive magnitude 7.8 earthquake which devastated San Francisco in 1906.