The Nile is a major north-flowing river in North Africa, generally regarded as the longest river in the world. The Nile has two major tributaries, the White Nile and Blue Nile. The latter is the source of most of the water and fertile soil. The White Nile rises in the Great Lakes in south Africa, with the most distant source being as-yet undetermined, and located in Rwanda. The Blue Nile starts at Lake Tana in Ethiopia and flows into Sudan from the south east. The two rivers meet near the Sudanese capital of Khartoum.
The northern section of the river flows almost entirely through desert, from Sudan into Egypt, these countries civilization depends on the river. Most of the population and cities of Egypt lie along those parts of the Nile valley north of Aswan, and nearly all the historical sites of Ancient Egypt are found along riverbanks. The Nile ends in a large delta that empties into the Mediterranean Sea. 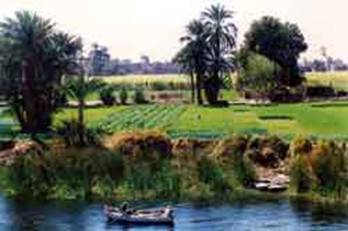 Here is a picture of the banks of the River Nile.

The Nile has been the lifeline of civilization in Egypt since the Stone Age, with most of the population and all of the cities of Egypt resting along those parts of the Nile valley lying north of Aswan. Climate change at the end of the most recent ice age led to the formation of the Sahara desert, possibly as long ago as 3400 BC.

The Nile River is the longest river in the world. The Nile flows into the Mediterranean Sea. The largest source of the Nile is Lake Victoria. Its average discharge is 3.1 million litres per second. The Nile basin is huge and includes parts of Tanzania, Burundi, Rwanda. The name Nile comes from the Greek “neilos”, which means valley. The Ancient Egyptians called the river Aur (black) because of the colour of the sediment left after the river’s annual flood. 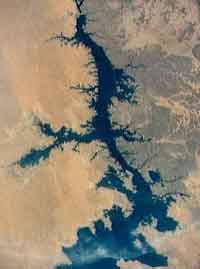 Here is a satellite photograph of the River Nile.

Not only is the Nile River one of the main rivers of Egypt, but many would in fact; say it is the primary river of Egypt. The Nile River has certainly played a critical role in the history of this mysterious nation. Today, exotic cities like Cairo grace the banks of the Nile River, as they have for thousands of years. Individuals interested in experiencing the Nile up close and personal can journey along the famous river aboard riverboat cruises that depart from numerous cities along the bank. 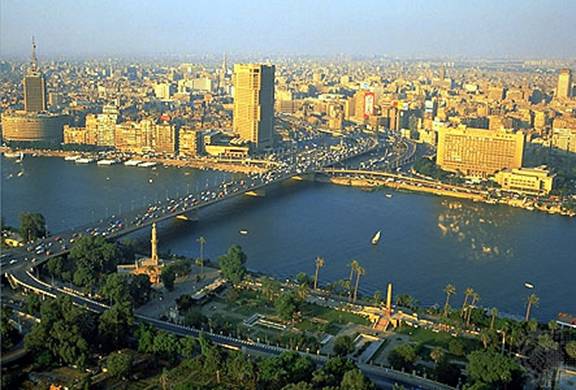 Here is a photograph that shows where the River Nile flows trough Egypt.