During the 1930’s as Japan expanded their empire in the Pacific, they knew that eventually they would end in conflict with the U.S. In anticipation they drew up plans to counter American armed forces in the Pacific. This involved an attack on the US Pacific Fleet at Pearl Harbor, Hawaii, and following this attack with the seizure of the Philippines, and cutting  U.S lines of communication by seizing Guam and Wake. Following completion of these objectives, the strategy would turn defensive, primarily holding their newly acquired territory while hoping for a negotiated peace.
By November 1941 these plans were essentially complete, and Japanese military planners’ expectation of success rested on the United Kingdom and the Soviet Union being unable to effectively respond to a Japanese attack because of the threat posed to each by Germany.
On December 7th, Japan launched a carrier-based air attack on Pearl Harbor, knocking eight American battleships out of action. The Japanese had gambled that the United States, when faced with such a sudden and massive defeat, would agree to a negotiated settlement. 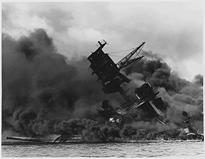 (USS Arizona sinking after the attack)

The first attack wave of 183 planes was launched north of O?ahu, commanded by Captain Mitsuo Fuchida. The second wave consisted of 171 planes.
On December 8th, President Franklin D. Roosevelt addressed the Congress to ask for a declaration of war against Japan. Referring to December 7th, 1941, as a “date that will live in infamy”, he gave the Pearl Harbor attack its most famous and enduring title. Within a few days, Germany and Italy had declared war on the United States. Even before the President’s speech, Americans were flooding recruiting offices to try to join the Armed Forces.
By May, 1942 (just 5 months after Pearl Harbor) off the coast of Australia, the next major naval battle occurred.  The resulting Battle of the Coral Sea was the first naval battle in which ships involved never sighted each other and aircraft were solely used to attack opposing forces. Although some ships were sunken and damaged the battle holds little significance to the war.

By June, 1942, what is widely regarded as the most important naval battle of the Pacific Campaign of World War II was located at Midway.
This attack like Pearl Harbor was aimed to eliminate the United States as a strategic power in the Pacific. It was hoped another demoralizing defeat would force the U.S. to negotiate an end to the Pacific War on conditions favorable to Japan.

While the Japanese planned there attack on Midway allied cryptanalysts had cracked their code. The Allies knew that Midway was the target of the impending Japanese strike, and also knew the date as the 4th or 5th of June, and to provide the U.S Commander with a complete order of battle.

Out of this fleet, in overall command, was Admiral Fletcher on the USS Yorktown. By 08:00am the fighters on the aircraft carriers Hornet, Enterprise and Yorktown had all departed. Unfortunately the much faster Mitsubishi A6M2 “Zeros” made short work of the TBD Devastators. Within the fleet, half a dozen torpedoes were fired, all were unsuccessful. With this the Americans still achieved three important things, first, they kept the Japanese carriers off balance, with no ability to prepare and launch their own counterstrike. Second, their attacks pulled the Japanese combat air patrol out of position. Third, many of the Zeros ran low on ammunition and fuel.

Near twenty minutes later the American dive-bombers arrived at the perfect time to attack. Armed Japanese strike aircraft filled the hangar decks, fuel hoses snaked across the decks as refueling operations were hastily completed, and the repeated change of ordnance meant bombs and torpedoes were stacked around the hangars. This made the Japanese carriers extraordinarily vulnerable.
The three Japanese carriers Soryu, Kaga, and Akagi were all stuck with heavy damage causing all three to be out of action and be eventually abandoned.

Hiryu, the sole surviving Japanese aircraft carrier, wasted little time in counterattacking. The first wave of Japanese dive bombers badly damaged Yorktown when three bomb hits that snuffed out its boilers, immobilizing it, yet its damage control teams patched them up so effectively that the second wave’s torpedo bombers mistook the ship for an undamaged carrier.

Despite Japanese hopes to even the odds by eliminating two carriers, the Yorktown absorbed both Japanese attacks, the second wave mistakenly believing Yorktown had already been sunk and they were attacking Enterprise. After two torpedo hits, Yorktown lost power, which put her out of action and forced Admiral Fletcher to move his command staff to the heavy cruiser Astoria. After winning a clear victory, and as pursuit became too hazardous near Wake, American forces retired.

On 10 June, the Imperial Japanese Navy gave the military liaison conference an incomplete picture of the results of the battle, on the ground the real extent of damage was a military secret not to be entrusted to all members. Japanese news announced a great victory. Only a few such as Emperor Hirohito were accurately informed of the losses and army planners continued to believe the fleet was healthy and secure.

The U.S, in collaboration with the United Kingdom and Canada, designed and built the first atomic bombs under what was called the Manhattan Project. The scientific research was directed by American physicist J. Robert Oppenheimer. The atomic bomb was first tested at Trinity Site, on July 16th, 1945, near Alamogordo, New Mexico.

On May 10–11, 1945 The Target Committee at Los Alamos, led by J. Robert Oppenheimer, recommended Kyoto, Hiroshima, Yokohama, and the arsenal at Kokura as possible targets. The target selection was subject to the following criteria:
The target was larger than three miles in diameter and was an important target in a large urban area.
The blast would create effective damage.
The goal of the weapon was to convince Japan to surrender unconditionally in accordance with the terms of the Potsdam Declaration. The Target Committee stated that “It was agreed that psychological factors in the target selection were of great importance
On July 26th, Truman and other allied leaders issued the Potsdam Declaration outlining terms of surrender for Japan. It was presented as an ultimatum and stated that without surrender, the Allies would attack Japan, resulting in “the inevitable and complete destruction of the Japanese armed forces and just as inevitably the utter devastation of the Japanese homeland”. The atomic bomb was not mentioned in the communiqué. On July 28, Japanese papers reported that the declaration had been rejected by the Japanese government. That afternoon, Prime Minister Kantaro Suzuki declared at a press conference that the Potsdam Declaration was no more than a rehash of the Cairo Declaration and that the government intended to ignore it. The statement was taken by both Japanese and foreign papers as a clear rejection of the declaration. Emperor Hirohito, who was waiting for a Soviet reply to noncommittal Japanese peace feelers, made no move to change the government position. On July 31, he made clear to his advisor Koichi Kido that the Imperial Regalia of Japan had to be defended at all costs.
In early July, on his way to Potsdam, Truman had re-examined the decision to use the bomb. In the end, Truman made the decision to drop the atomic bombs on Japan. uring the final stages of World War II in 1945, the United States conducted two atomic bombings against Japan in the cities of Hiroshima and Nagasaki.
After six months of intense strategic fire-bombing of 67 Japanese cities the Hirohito regime ignored an ultimatum given by the Potsdam Declaration. By executive order of President Harry S. Truman the U.S. dropped the nuclear weapon Little Boy on the city of Hiroshima on Monday, August 6, 1945, followed by the detonation of the bomb Fat Man over Nagasaki on August 9. These are the only attacks with nuclear weapons in the history of warfare.

The bombs killed as many as 140,000 people in Hiroshima and 80,000 in Nagasaki by the end of 1945.
Victory over Japan Day (V-J Day, also known as Victory in the Pacific Day, or V-P Day) is a name chosen for the day on which the Surrender of Japan occurred, effectively ending World War II, and subsequent anniversaries of that event. The term has been applied to both the day on which the initial announcement of Japan’s surrender was made in the afternoon of August 15, 1945 in Japan and to August 14, 1945 where it is observed as V-J Day in the United States when it was announced and to September 2, 1945 when the formal signing of the surrender was made. The name V-J Day had been selected by the Allies after they named V-E Day for the victory in Europe.
A formal surrender ceremony was performed in Tokyo Bay, Japan aboard the battleship U.S.S. Missouri on September 2, 1945.
On August 6 and 9, the Americans dropped atomic bombs on Hiroshima and Nagasaki, respectively. Also on August 9, while in violation of the Soviet–Japanese Neutrality Pact, the Soviet Union launched a surprise invasion of the Japanese colony in Manchuria. These twin shocks caused Emperor Hirohito to intervene and order the “Big Six”to accept the terms the Allies had set down for ending the war in the Potsdam Declaration. After several more days of negotiations, Hirohito gave a recorded radio address to the nation on August 15. In the radio address he read the Imperial Rescript on surrender, announcing to the Japanese populace the surrender of Japan.
On August 28, the occupation of Japan by the Supreme Commander of the Allied Powers began. The surrender ceremony was held on September 2 aboard the U.S. battleship Missouri, at which officials from the Japanese government signed the Japanese Instrument of Surrender, officially ending World War II. Allied civilians and servicemen alike celebrated V-J Day, the end of the war. However, some isolated commands and personnel from Japan’s far-flung forces throughout Asia and the Pacific islands refused to surrender for months and years after, into the 1970s. Since Japan’s surrender, historians have debated the ethics of using the atomic bombs.
Hostilities formally ended when the Treaty of San Francisco came into force on April 28, 1952.
In a crucial battle between two powers that lasted from December 7th, 1941 and formally ended on April 28th, 1952, the death toll for Japan alone was as many as 2.7 million. One fifth (580,000) of which was civilians.
America in total lost even less than those of just the Japanese civilians at only an estimated 418,500.